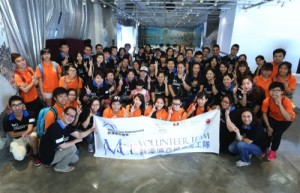 It is a tradition for employees of Melco Crown Entertainment to donate their mooncakes given by the company to the Macau community every year before the Mid-Autumn Festival.  This year, in collaboration with the Adult Commitment Day of Pan Mac Junior Chamber, Melco Crown Entertainment volunteers and over 20 local youths distributed the donated mooncakes to over 800 community members in Macau.
To give this annual tradition a meaningful touch, Melco Crown Entertainment invited over 20 local youths – who are just turning 18 this year, and are participants of the Adult Commitment Day of Pan Mac Junior Chamber, vowing to become an active citizen from age 18 onwards – to be part of the distribution team.
Ms. Akiko Takahashi, Executive Vice President, Chief Human Resources and Corporate Social Responsibility Officer, said, “I wish to thank all our colleagues and volunteers who participated in this activity. Our Co-chairman and CEO Mr. Lawrence Ho is grateful to our colleagues who have donated their own mooncakes and delighted that the concept of giving back to the community is demonstrated by the youth.” 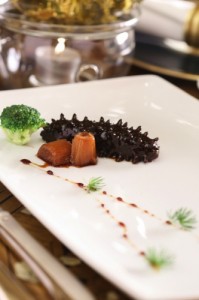 Lu cuisine, also known as “Shandong cuisine”, is one the Eight Culinary Traditions of Chinese cuisine. From September 11 to 18, Chef Quhao, known as the master of Lu cuisine and a transmitter of China’s intangible cultural heritage will be joining Chef Chow Chung, Chinese Cuisine Consultant Chef and Chef Louie Vong, Executive Sous Chef of Chinese Cuisine at MGM Macau to present an array of savory dishes at Grand Imperial Court, that delivers the essence and characteristics of authentic Lu cuisine: fresh, tender, crispy, with a fine-crafted presentation that will leave guests impressed with this northern gastronomic feast. 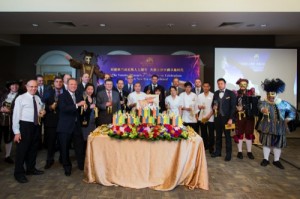 The Venetian Macao welcomed its 7th anniversary yesterday, and the integrated resort continued its tradition of holding a celebration event for its team members. With Sands China Ltd. senior executives in attendance, including President and Chief Executive Officer Edward Tracy, the celebration at the team member dining room included a prize presentation and a company-wide lucky draw for the resort’s 10,000-plus employees. Sands China also took advantage of the celebration to further promote its “Era of Excellence” values launched in early July among its employees.
A prize presentation followed in which leaders of Sands China’s six sports teams received a prize on behalf of their teams from Mr. Tracy. A company-wide lucky draw was then held, giving away over MOP 100,000 and a surprise cash prize of MOP 8,828 from Mr. Tracy to a total of 40 winners. A seventh-anniversary cake was prepared for the occasion; 11 team members whose birthdays are on Aug. 28 and who have worked at The Venetian Macao since its opening were invited to participate in the cake cutting ceremony and also received birthday cards and gifts from the company’s senior executives.