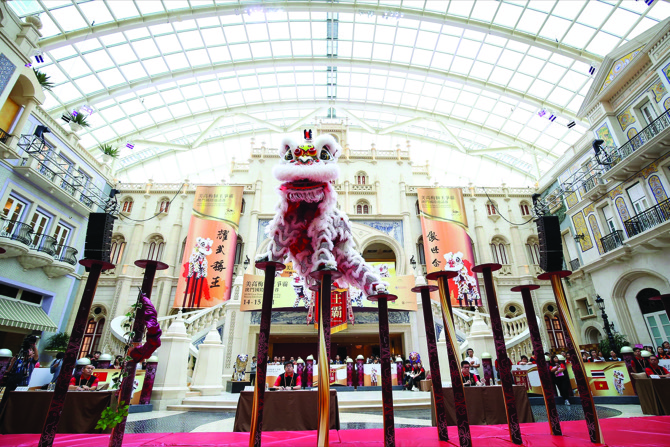 MGM and Wushu General Association of Macau are co- hosting their signature event “MGM Lion Dance Championship – Macau International Invitational 2018” on November 10 and 11, with the support of Macao Government Tourism Office, Education and Youth Affairs Bureau, and Dragon & Lion Dances Federation of Asia. The event will be taking place at the MGM Cotai Theater, which will be transformed into a space for the competition.

The event was first launched in 2010 by MGM as a way to transform this significant piece of Chinese culture into an internationally recognized sport. In addition to the “Male Lion Dance Championship” and the “Female Traditional Lion Dance Championship”, MGM will start a new tradition this year by hosting Macau’s first ever “Junior Lion Dance Performance Competition”. The MGM International Lion Dance Championship 2018 will feature the very best lion dance troupes from 13 countries and regions, including China, Hong Kong SAR, Macau SAR, Chinese Taipei, Indonesia, Malaysia, Philippines, Singapore, Thailand, and Vietnam. It also gathers lion dance teams from Australia, Myanmar and the United States, which will make it the competition with the widest range of participating nations to date.

The two-day action-packed event will start with the “Female Traditional Lion Dance Championship” featuring 10 female lion dance troupes. The troupes, including 2016 champion Wushu Federation from Philippines, will strive for first place with their awe-inspiring and flexible moves. The “Junior Lion Dance Performance Competition” will take place in the afternoon on the first day of the event. A total of seven junior teams will be fiercely competing for the win in Macau’s first junior lion dance competition.