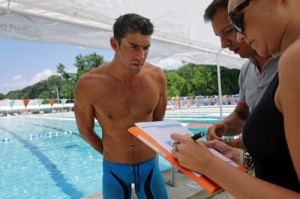 Michael Phelps has been linked with Speedo throughout his swimming career, most notably collecting a USD1 million bonus after he won a record eight gold medals at the Beijing Games.
Now, as he comes back from retirement, the most decorated athlete in Olympic history will have a different look.
Phelps announced yesterday that he signed a deal with Aqua Sphere, a company that has extensive experience with triathlons and recreational swimming but will be designing a racing suit for the first time.
“Throughout my career, I’ve been able to do a lot of things with Speedo. The relationship was great,” Phelps told The Associated Press. “But we came to a point where we had an opportunity to really change the sport and grow the sport even more.”
Phelps and his coach, Bob Bowman, will be working with Aqua Sphere on a range of products beyond racing suits, hoping to lure more kids into swimming and reduce the number of drowning deaths.
The deal is a huge coup for Aqua Sphere, which is now represented by the American as it tries to carve out a niche alongside more established swimsuit companies such as Arena, Speedo and Tyr.

Luxury car maker BMW says its net earnings jumped 27.2 percent in the second quarter as an improved model mix boosted the company’s profitability and sales grew worldwide.
BMW AG said yesterday that it earned 1.77 billion euros (USD2.38 billion) in the April-June period, up from 1.39 billion euros a year earlier.
Revenue rose 1.8 percent to 19.9 billion euros, a figure dampened by currency effects. The company sold 5.3 percent more cars, delivering 533,187 vehicles.
The company confirmed its forecast that full-year deliveries to customers and pre-tax profit will both rise significantly.
However, it said the pace at which earnings increase in the second half will be influenced by high spending on new technology to reduce carbon dioxide emissions and cautioned that “the global economy also faces risks.” 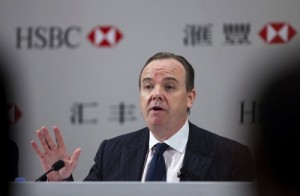 HSBC, one of the world’s largest banks, warned Monday that fragile growth in the global economy and rising geopolitical tensions will keep it from taking on greater investment risks.
In its earnings update, HSBC said its net income fell 5.4 percent to USD9.46 billion in the first half of the year. The bank, which earns nearly two-thirds of its profit in Asia and is closely watched as a barometer of growth in the region, saw its pre-tax profit fall there by 15 percent.
Earnings from the investment banking business declined globally by 12 percent to just over $5 billion.
Chairman Douglas Flint said that with world economies still recovering from the 2008 economic crisis, it was not the time to take chances.
“At a time of residual concerns over the sustainability of economic growth in many major markets and with heightened geopolitical tensions apparent, the board supported management’s view that this was not the time to expand risk appetite to offset the effect of lower revenues.”