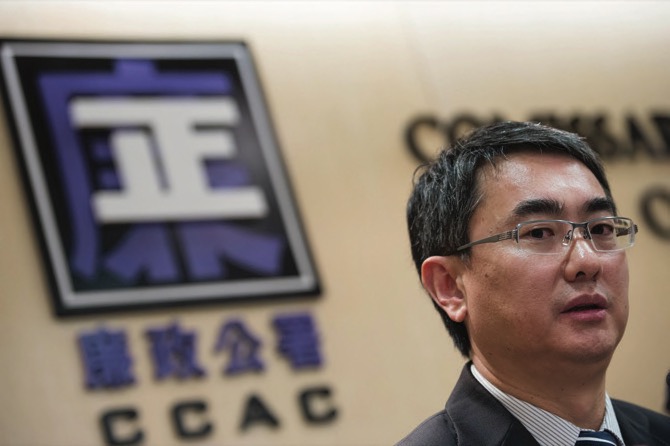 Commission Against Corruption (CCAC) investigators detected an increase in cases of fraud, document forgery and the abuse of power committed by public servants in 2018, especially in those that saw violations of the law exchanged for the private gain of senior state officials.

In its 2018 Annual Report, the CCAC said it would be necessary moving forward to strengthen the integrity and responsibility of senior government officials.

While the abovementioned crimes were on the rise, the Annual Report conversely pointed to a decrease in bribery cases detected by the anti-graft body last year involving public servants.

Nevertheless, the CCAC warns that public officials “shall not take advantage of their powers and positions directly or indirectly for private gain.”

Over the course of 2018, the CCAC investigated a number of fraud cases relating to government subsidies, with the Fund of Environmental Protection and Energy Saving, as well as the Fund of Continuing Education identified as some of the culprit organizations. The Commission said that such cases demonstrate the need for more stringent criteria and the monitoring of the grant of subsidies by public services.

In 2018, the corruption watchdog completed two major inquiries on a controversial construction project at Alto de Coloane and on the approval of ‘major investment immigration’ and ‘technical immigration’, as arranged by the Macao Trade and Investment Promotion Institute (IPIM). The Annual Report noted that, in the latter case, the involvement of senior government official Jackson Chang, former IPIM president, indicated that corrupt practices had spread even into leadership positions in the Macau government.

A summary of the Annual Report released on the CCAC website yesterday described in somewhat colloquial terms the public’s reaction to learning of these two cases. “Even citizens thought that they were unbelievable and smelled a rat after knowing them,” the summary reads, paraphrasing the statement of CCAC Commissioner André Cheong in the report’s foreword.

Cheong states in the Annual Report that being incorruptible and not accepting bribes and other personal gain constitute the minimum legal requirements for public positions.

In 2018, the CCAC received a total of 733 complaints and reports, of which 141 involved corruption and 592 were about administrative impropriety. Compared with the previous year, there was a decrease in complaints and reports, attributed by the CCAC to the occurrence of the 2017 Legislative Assembly Election, which prompted enquiries pertaining to the legal conduct of various aspects of the election.