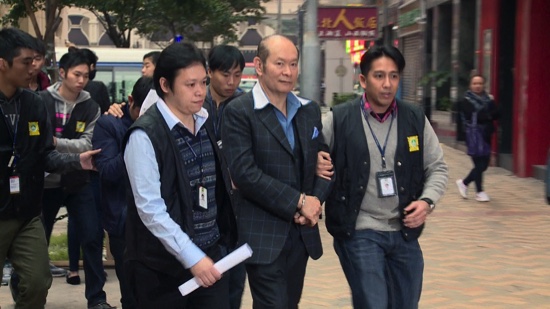 Alan Ho at the moment of his arrest, 14 months ago

Kelly Wong, the former assistant deputy manager for “Special Market” of Hotel Lisboa was the only defendant to get sentenced with a heavier penalty. She was condemned to 2 years and 5 months behind bars for having earned money at the expenses yof prostitution from others what confines the legal frame of a crime of prostitution exploitation.

After 14 months behind bars, Alan Ho, nephew of Macau gaming tycoon Stanley Ho, walks out of jail. He was sentenced to 13 months of imprisonment (already served) for one crime of prostitution exploitation for knowing and favoring the prostitution activities to continue to operate in the hotel he managed.

As for the other four defendants, Peter Lun, Bruce Mak, Qiao Yan Yan and Pun Cham Un, they were considered guilty of complicity in the activities, which granted them sentences in between 5 and 7 months of imprisonment (all considered served).

The final verdict was pronounced this Thursday morning at the Court of First Instance (TJB) by the president of the collective of judges, Rui Ribeiro. RM
READ MORE ON MACAU DAILY TIMES PAPER EDITION TOMORROW