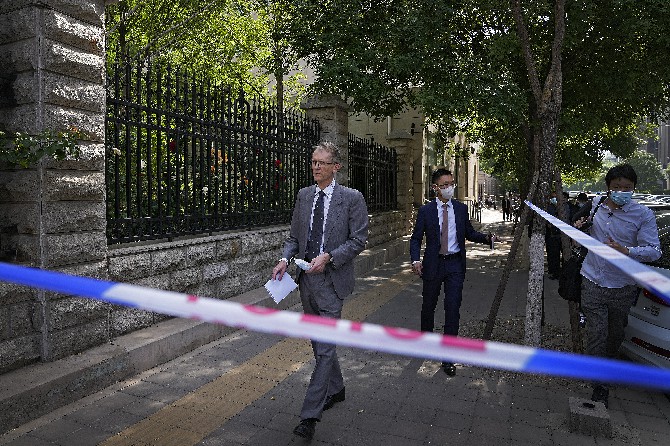 Australian ambassador Graham Fletcher (left) leaves the court after he was denied to attend the espionage charges case for Yang Hengjun, in Beijing, yesterday

China yesterday put a Chinese Australian writer on trial for alleged espionage and denied the Australian ambassador in Beijing access to the hearing.
Yang Hengjun has been held since arriving in China in January 2019 and has had no access to family and only limited contact with his lawyer, the Australian government has said.
Ambassador Graham Fletcher walked to the court complex gate in Beijing and returned after he was denied entry, telling journalists it was “regrettable” that diplomats were prevented from observing the trial.
His government had been told earlier that a representative would not be allowed to attend the trial because it is a national security case. Fletcher said China has only said that the charge against Yang involves espionage.
“This is deeply regrettable and concerning and unsatisfactory,” Fletcher said. “We’ve had longstanding concerns about this case, including lack of transparency, and therefore have concluded that it’s an arbitrary detention.”
Authorities have not released any details of the charges against Yang, a novelist who reportedly formerly worked for China’s Ministry of State Security as an intelligence agent.
Yang’s lawyer, Mo Shaoping, said the hearing concluded shortly before 5 p.m., with a verdict to be issued at a later date, but declined further comment, saying “the case involves state secrets.”
Yang has denied the accusation against him, and while a conviction is virtually certain, it isn’t clear when the verdict will be handed down. The espionage charge carries penalties ranging from three years in prison to the death penalty.
In comments believed to have been dictated to diplomats in March and reproduced in Australian media, Yang said the lack of fresh air and sunshine had taken a toll on his health but that spiritually, “I’m still strong.”
“There is nothing more liberating than having one’s worst fears realized,” Yang said.
Yang appeared to be in satisfactory health, Fletcher said.
Australia will continue to “advocate strongly” for Yang and did not see a link between his case and the overall state of ties with China, Fletcher said.
Chinese Foreign Ministry spokesperson Zhao Lijian said China was following international practice in barring observers from attending a case involving state secrets.
The trial comes at a time of deteriorating relations between the two countries, brought on by Chinese retaliation against Australian legislation against foreign involvement in its domestic politics, the exclusion of telecommunications giant Huawei from its 5G phone network, and calls for an independent investigation into the origins of the COVID-19 outbreak that was first detected in China in late 2019. MDT/AP