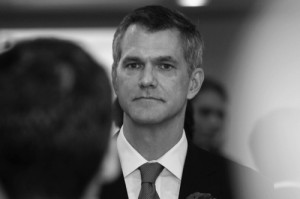 Sands China Ltd.’s secret investigation of Macau government officials, allegedly ordered by its Chairman Sheldon Adelson, is fair game in the feud between the billionaire and the casino operator’s former top executive.
Steven Jacobs, locked in a four-year battle with Adelson, yesterday won the right to use a report on the probe in his wrongful-termination lawsuit. Jacobs contends he was ousted in 2010 as chief executive officer of the China unit of Las Vegas Sands Corp. because he clashed with Adelson over demands he collect information on Macau officials to exert “leverage” on them.
Jacobs claims the report by a Hong Kong risk consultant, and two others on alleged ties between Sands China associates and Chinese organized crime, will expose the company to “serious political and legal problems.” Sands argued that Jacobs “stole” the documents when he was fired, and that they should be legally off-limits for use in the lawsuit.
Nevada District Judge Elizabeth Gonzalez, at a hearing yesterday in Las Vegas, ruled Jacobs can use the reports while ordering that they be treated as confidential information, meaning they may not become public. Sands had asked for them to be treated as highly confidential, meaning only attorneys and the judge could see them.
“In some cases, they would call this blackmail,” J. Randall Jones, a lawyer for Sands China, said of Jacobs’s effort to use the information. The case has been bogged down over the question of whether Jacobs can sue the Chinese subsidiary in Nevada. Sands says the unit doesn’t do business in the U.S.
Jones said Jabobs wants to use the reports’ “sensitive information” as leverage against Adelson to gain a financial advantage. Gonzalez rejected Jones’s request to hold a separate evidentiary hearing on whether the reports are relevant to the question of the case belonging in Las Vegas. She set a hearing for April 20 to consider whether Las Vegas is the proper location.
Todd Bice, a lawyer for Jacobs, told the judge that the reports are relevant because they demonstrate who was really in charge in Macau, namely the Las Vegas-based parent company. The company has conceded that at least two of the reports were commissioned by Las Vegas Sands Corp.
“These documents substantiate what Mr. Jacobs said was going on in Macau,” Bice said. Sands wants to keep them under wraps because they are embarrassing and contradict Adelson’s public statements, Bice said.
“I never asked or authorized Jacobs to conduct a private investigation of or ‘create a dossier’ on Macanese officials,” Adelson said in his court declaration. “We believe unequivocally that Jacobs initiated the investigation on his own for his own purposes.”
Jacobs contends Sands engaged in “a game of doublespeak,” because the company first disavowed any involvement in the reports and later argued they should remain confidential or be barred as evidence. Jacobs returned at least some of the original documents to Sands and kept copies for himself, according to court records.
A second report Sands wanted to keep out of court was a background investigation of Cheung Chi Tai, an alleged member of a Hong Kong organized-crime group known as a triad who has been involved in operating VIP rooms in Macau casinos.
According to Hong Kong court records, Cheung was one of the owners of Neptune Group Ltd., a listed company that has invested in junket operators. According to Neptune’s 2014 annual report, it operated VIP clubs at Sands China properties.
A U.S. Senate investigative committee has identified Cheung as one of the nine leaders of the Wo Hop To Triad, the Justice Department said in a court filing.
Jacobs, in a revised version of his lawsuit filed Dec. 22, claims one of the issues he and Adelson clashed over was whether the board of directors should be informed about findings related to media reports that the company was conducting business with Chinese organized crime syndicates.
The third document Sands sought to keep sealed is a background check on Heung Wah Kong, also known as Charles Heung, a Hong Kong movie producer.
Vickers, former commander of the Royal Hong Kong Police’s Criminal Investigation Bureau, spoke at an April symposium at the University of California at Berkeley about the role of organized crime in moving money from mainland China, where gambling is illegal, to Macau, where visitors are restricted from bringing large amounts of cash with them. Edvard Pettersson, Bloomberg