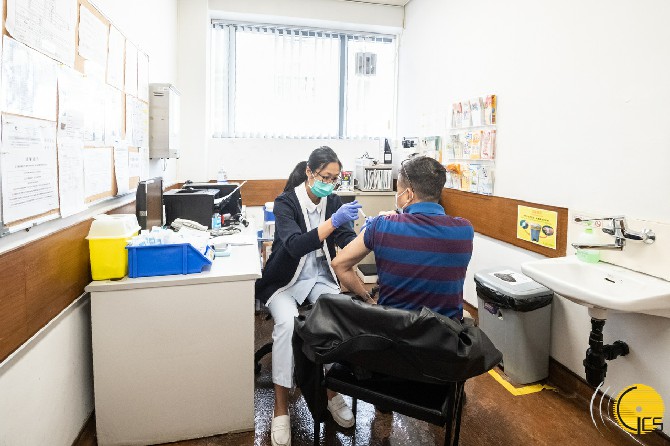 Another 200,000 dose batch of Sinopharm-inactivated vaccine is set to be dispatched to Macau by mid-August — but the city will still see it out of stock for two to three days prior to its arrival.
In response to queries from the media, coordinator of the Health Bureau’s Covid-19 Vaccination Operation Tai Wa Hou that Macau, as of July 30, still had 42,000 doses of Sinopharm vaccine in stock, as of last Friday at the media briefing. This would suffice for two weeks of use, based on the current rate of 3,000 doses administered per day.
It is expected that stock will run out for two to three days before the next batch arrives in Macau, during which the inoculation service will be temporarily suspended.
The authorities will liaise with the supplier to ensure the new batch will arrive in time, he added.
There are still around 80,000 doses of BioNTech vaccine in stock. Given its current vaccination rate of 400 to 500 doses per day, Tai said the mRNA vaccine is projected to last for five to six months more. Among the existing supply, there are 2,800 doses of mRNA vaccine expected to be used up before their expiry on August 4.
Another two batches of mRNA vaccine, containing over 30,000 doses and 40,000 doses, are set to land in Macau in early November and mid-November, respectively.
From today onwards, all residents aged 60 or above can enjoy walk-in inoculation services at all vaccination centers, without the need for online registration.
No timeframe for
HK-Macau travel bubble
Tai reiterated that there is decidedly no timeframe for the reinstatement of the Hong Kong-
Macau travel bubble scheme. Reinstatement of the plan necessitates communication between Macau and mainland authorities.
Earlier on July 20, Secretary for Social Affairs and Culture Ao Ieong U unveiled to the media the government’s plan to invite experts from the National Health Commission (NHC) of the People’s Republic of China to conduct a site visit in Macau. The invitation is a bid to gain their advice regarding the arrangement of more convenient intercity and cross-border travel regimes with Hong Kong and mainland China.
Tai said last Friday that no timeframe has been set for when they will come to Macau.
The study of the administration of boost shots is still underway. However, he said this program is still not yet approved by international watchdogs and lacks sufficient data.

Responses to Covid-19 resurgence
Given the Delta-driven Covid-19 resurgence in China, the government announced last Thursday a set of rigorous measures to contain contagion risks.
Since the announcement, residents and the media have expressed concerns about an apparent loophole in one measure. This measure requires flight passengers from all mainland provinces, but not arrivals from land and sea ports, to present proof of a negative test for Covid-19 conducted within 48 hours before boarding. Some pointed out that arrivals from high-risk areas could have come to Macau through Zhuhai and Guangzhou, without the need to take direct flights.
In response, Tai said Zhuhai and Guangzhou municipal governments already had strict control measures in place to deal with arrivals from high-risk areas.
“In addition, the current pandemic situation of Guangdong (GD) Province is very stable. Thus, we think we should sustain the seven-day validity for the Covid-19 test certificate for arrivals from GD Province through land ports,” he explained.
Moreover, over 100 people who had been to Zhangjiajie since July 17 either left Macau or were admitted to quarantine facilities for 14 day medical observation, Leong Iek Hou, coordinator at the Center for Disease Control and Prevention, stated.
To clarify ambiguities concerning the required Covid-19 testing dates for people who had been to specific high-risk mainland areas, Leong stated that they have to undergo a total of five tests — to be conducted on the first, second, fourth, seventh and 12th days of observation.
However, the number of tests will vary by person, as they no longer need to undergo testing once it has been over 14 days since they left these areas.
From July 31 onwards, arrivals who had been to high-risk regions in Chongqing since July 24, or those areas in Yangzhou, Xiamen and Zhuzhou cities from July 25, must undergo mandatory quarantine upon arrival until have cleared over 14 days since leaving these areas.
On July 31, the government further tightened measures, requiring all arrivals who had been anywhere in the whole of Xiamen city from July 25 to conduct several tests upon arrival, with their health code also changed to yellow.