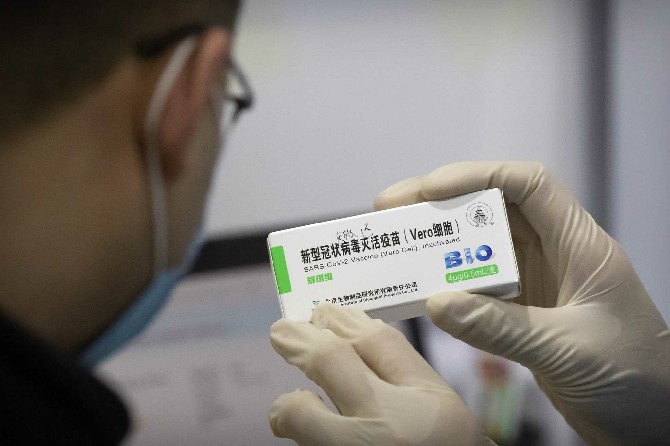 China yesterday announced a plan to provide 10 million coronavirus vaccine doses to developing nations through the global COVAX initiative as part of its ambitious diplomatic and business efforts to distribute Chinese vaccines around the world.
Foreign Ministry spokesperson Wang Wenbin said China is responding to a request from the World Health Organization as developing countries seek to fill shortages predicted to run through March. He did not offer details on which vaccine China was providing to COVAX, or whether it was a donation.
China has already shipped large numbers of doses of its own vaccines, mainly to developing countries. It has pursued deals or donations with more than 30 nations far exceeding the 10 million doses it is providing to COVAX. In Turkey alone, Chinese company Sinovac Biotech Ltd. has struck a deal to sell 50 million doses.
Its global efforts are seen by many as an attempt to boost China’s reputation as it seeks to repair its image after the first cases of the coronavirus were detected in the central Chinese city of Wuhan in late 2019. Earlier on during the pandemic, China donated face masks and protective gear to countries around the world as part of a diplomatic push. It has called the virus a mutual challenge facing humanity and even suggested it may have been brought from outside the country.
It agreed to join COVAX, coordinated by the World Health Organization and GAVI, the Vaccine Alliance, last October, notably when the U.S. under then President Donald Trump had declined to join.
COVAX seeks to ensure that low- and middle-income countries have enough vaccines as wealthy nations have snapped up a large part of the billions of upcoming doses from mostly Western vaccine makers.
“We hope countries in the international community with the capability will swing into action, support COVAX through practical actions, support the work of the World Health Organization, assist developing countries in obtaining vaccines in a timely manner and contribute to … conquering the pandemic at an early date,” Wang said a daily briefing.
WHO is in the process of approving Chinese vaccines for emergency use, he added.
So far, COVAX has secured only a fraction of the 2 billion doses it hoped to buy in 2021. Pfizer last month committed to supply up to 40 million doses of its COVID-19 vaccine this year through COVAX. The facility also has 150 million doses of the vaccine developed by AstraZeneca and Oxford University.
Two Chinese companies, state-owned Sinopharm and Sinovac, have been behind a large part of the effort to take Chinese vaccines abroad, which has largely happened outside the COVAX framework. Both companies’ vaccines are inactivated, relying on a traditional technology of growing and killing a live virus. The virus is then purified before it is given as an injection.
The inactivated vaccines appear to be less effective than more modern mRNA vaccines. However, they are easier to transport than Pfizer’s mRNA vaccine, which requires ultracold storage, a challenge for many lower-income countries.
Only one of the vaccines, made by Sinopharm, has been approved for general use within China. Both, however, have won either emergency or broader approvals in other countries, and are actively being used in mass vaccination campaigns from the United Arab Emirates to Indonesia.
The vaccines have been criticized for a lack of transparency in data from the final stage of clinical trials. Sinopharm said its vaccine is 79.3% effective. Sinovac’s shot in particular has raised concerns after it initially announced an efficacy rate of 78% at protecting against symptomatic illness, but after counting mild cases announced that effectiveness is just over 50%, based on its trial in Brazil. AP