Chief Executive (CE) Ho Iat Seng has urged Macau to stay calm during this period of “immediate prevention status,” reassuring the city that there is no reason for panic.
In a special press conference held yesterday at the government’s headquarters, the CE emphasised that the Covid-19 pandemic situation in Macau is under control. He added that, from the 1,900 nucleic acid tests (NAT) performed by all those in close contact with the four Covid-19 infected, over 1,500 had negative results.
“Regarding the tests [NAT] done until now [Wednesday morning], we have collected around 1,900 samples from the students; and members of the group [that traveled together with the resident suspected to be the cause of the infection]; and also from their family members — and we already know that over 1,500 tests had a negative result. Besides, another 10 people [including students from the dance group who are currently out of Macau] also underwent testing in the mainland and Hong Kong, and their results are also negative. There is no vague data, but accurate data that we already managed to obtain and confirm,” the CE said.
He went to express satisfaction with the collaborative work that was done from noon of August 3 (the time of the first notification from Zhuhai) to the evening of the same day.
Ho also informed the media that the current immediate prevention status is expected to remain in force for a period of 14-days, after which he believes the situation in Macau can return to normalcy.
“If our prognosis is correct [on what the source of the first infection was], we can be rest assured because the source [of infection] is at least not from Macau. So, in principle, within 14 days, we [will] have the situation returning to the normal [as per what it was] before this scenario and be [again] considered as a region of low risk [of contagion],” the CE concluded. 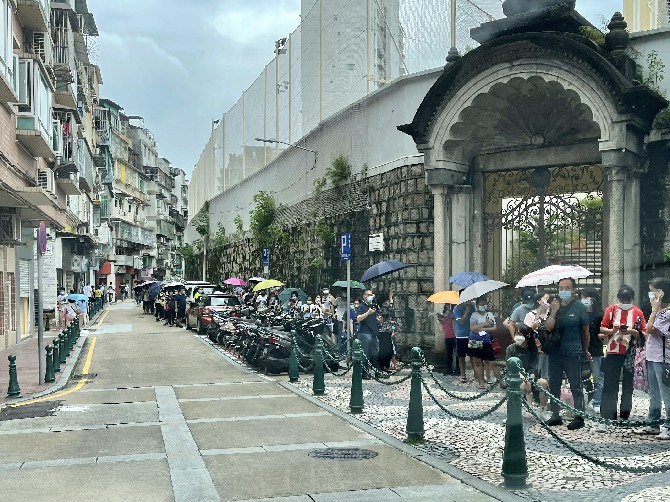 Flight labeled as the source of infection
Citing conclusions reached during an online meeting between the CE, local, regional and national health authorities, and Dr. Zhong Nanshan, a reputable Chinese expert on pneumology and virology, Ho said that the source of the Covid-19 infections should have been the flight on which the local student traveled to Xi’an.
“We have learned that, from the same flight, a person from Zhongshan and another from Zhuhai also tested positive […] Both traveled in row 54 of the airplane, the same row where the local student was seated. So, for the time being, we can consider as the first conclusion that the source of the infection was in the flight and occurred at row number 54,” Ho explained. He added that the results obtained from the tests — namely the anti-bodies test — matches with such a source of infections. 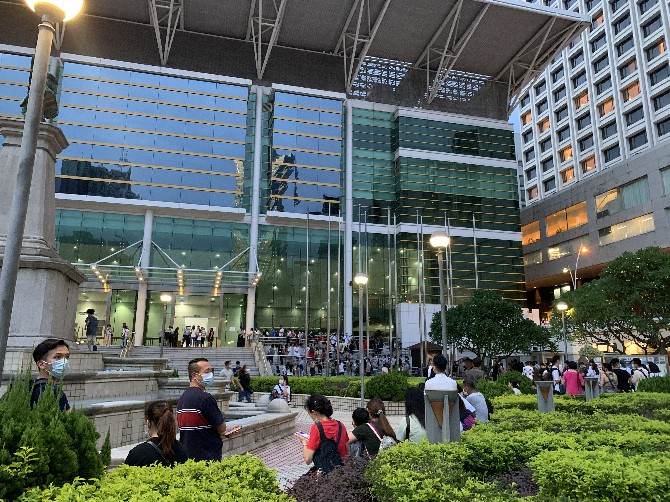 Failures on Health Code software
The CE also took the opportunity during the press conference to apologize for the problems that occurred yesterday morning with the Health Code software.
Ho explained that the problems in the operation of the system were due to last-minute measures enforced by the Zhuhai authorities, who further reduced the validity period of NAT from the original 24 hours to just 12 hours.
“I am sorry that the software system was not working as it should [yesterday] morning. [This is because] when we changed it to the 24 hours [validity] of the tests, there were no problems. But then last night, Zhuhai [authorities] communicated that the restrictions to cross the border should be stricter and so we had to change from 24 hours of validity of the NAT to just 12 hours and due to that the system had operational problems. We had to change [the validity] from 7 days to 24 hours and then to 12 hours,” the CE explained and apologized for the hassles caused to the population.
Ho also noted that yesterday the number of people crossing borders reduced to about 25% of normal border movement, which leads him to believe that in the upcoming days the system will be stable and there will not be any further operational issues reported.

School Community should take responsibility
Questioned on the Hou Kong Middle School’s assumption of responsibility over the school trip to Xi’an that resulted in the first community Covid-19 infection in Macau, the CE explained that the whole school community should take responsibility for the incident.
“Everyone, including the school, teachers, students, and even the parents, should assume their responsibilities as there was already news that in Nanjing, there was a situation of the pandemic outbreak and they still moved forward with the trip. I think they should not have done that,” the CE said. He noted that, although Xi’an was not considered as a high-risk area at the time, the flight taking the group of students to Xi’an started from Nanjing and made a stopover in Zhuhai before heading to Xi’an.
The CE also clarified that the government is not considering any form of punishment for the school but remarked that he hopes that people have learned from this serious incident

No need to rush for NAT, booking is essential
During the same press conference, the Secretary for Social Affairs and Culture, Elsie Ao Ieong, urged citizens to not rush to the NAT sample collection points and not to gather in long queues at these venues if they do not have a scheduled NAT.
Ao Ieong reaffirmed that those who walk-in will not be able to do the NAT. She has asked those who have difficulties completing the online application to seek help from the Social Welfare Bureau staff.
She also called on citizens to remain calm and not to rush to do the NAT on the first day of the citywide mass testing, unless they need to cross the border into the Mainland or exit the region via the airport.
According to figures updated by the health authorities, as of 4 p.m. yesterday, a total of 286,000 NAT had been already scheduled for the upcoming three days, following the earlier call from the Secretary and CE for people not to rush to testing venues.
The health authorities also added that around 50,000 samples have been collected during the same period.
Ao Ieong remarked that gathering in long lines under the sun or in rain is both counterproductive and unnecessary, as there is enough time for everyone to get tested without any hassle.
Replying to a question from the media, the Secretary also clarified that everyone in Macau should be tested, including children and newborns.

For the time being, the CE has rejected the idea of taking further measures, including the closing of casinos and other services. He justified his stance by saying that such venues are where high standards for the health of entrants is enforced, and that the residents who are infected with the virus were not associated with any casino activities.
“For the time being, we are not going to close the casinos because the problem did not happen in the casinos. [Previously], we closed the casinos because the people involved were casino workers, and that is why we took the measure of closing them for 15 days. But now the case involves a worker in a fruit stall, and that is why those stalls and shops in the surroundings need to be closed,” Ho explained, adding that any other measures might be addressed gradually and on a case-by-case basis, not in a general manner.
When asked about the decision to close other entertainment venues such as karaoke, bars and saunas, the CE explained that, in this case, what is being considered is the fact that in these types of establishments people do not need to wear a facemask at all times, unlike in casinos. RM