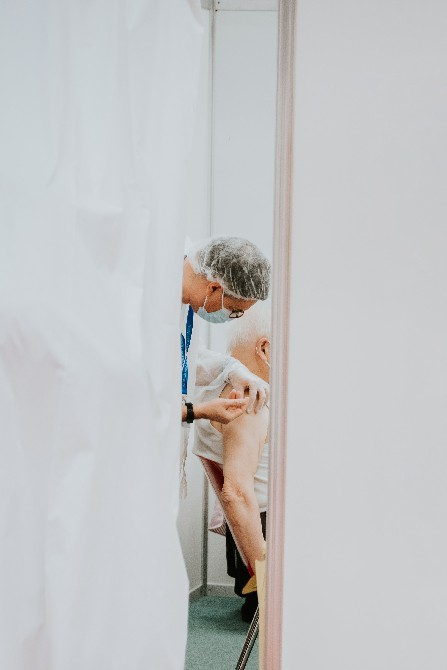 Health authorities said yesterday that demand for vaccines has increased significantly since the government announced a measure known as “jab or job” earlier this week, with the intention to vaccinate more of Macau’s working class.
During the health authorities’ regular Covid-19 briefing, Dr. Leong Iek Hou, coordinator of the Center for Disease Control and Prevention, said that the demand for vaccines has increased significantly. It has risen from an average of 2,000 bookings per day last week to 3,000 to 4,000 inoculation bookings each day this week, Leong said.
Leong admitted that the initiative was a response to less-than-positive remarks regarding the vaccination rate made by the Chinese National Health Commission during a recent visit to Macau that focused on Covid-19 prevention and control. The measure aims to quickly boost the vaccination rate.
She said it is imperative that people in Macau — especially those suffering from chronic medical conditions and the elderly — understand that they are both the main beneficiaries of vaccination and the reason for the push from the government.
While some people are afraid of the vaccine due to fear of adverse effects, many erroneously believe they are not suitable for vaccination, Leong said.
“Some people have hypertension or diabetes and so they think they cannot have the vaccine […] but those are not limiting factors. This is the main group that should get the vaccine, as they have a higher risk of complications in case of infection,” she explained.
High vaccination rate won’t ease borders
When questioned about opening borders and easing border restrictions to countries or regions with a high vaccination rate, Leong noted that this is out of the question as “it does not matter how high their vaccination rate is, what matters is ours.”
Leong explained that, as vaccination is not 100% effective in preventing infection, the transmission of the virus by vaccinated individuals is still possible.
“If we ease the restrictions, we are putting at risk the people [in Macau] with chronic diseases and the elderly. This can cause severe problems and even death. So this has nothing to do with other countries’ vaccination rates, but with our vaccination rate,” she said.
“If there is a [local outbreak] it might cause the collapse of our health system and this is a very important matter that carries severe risks,” she concluded, noting that the current focus is vaccinating the whole population of Macau.

Local health authorities have no plans to suspend administration of the second dose of the mRNA (Pfizer-BioNTech) vaccine to younger people, Dr. Leong Iek Hou confirmed yesterday.
When asked on the topic, Leong said: “This has to do with mRNA vaccines and related cases of myocarditis. We have had an interdepartmental meeting to reach a consensus on this matter and we think there is not enough reason to justify the suspension of the second dose, so we will continue to recommend the second dose of an mRNA vaccine.” She added that local authorities are considering cases of myocarditis worldwide and not just locally or regionally.
The question came after the decision made yesterday by the Hong Kong health authorities to suspend second doses, based on the potential of cases of the inflammatory heart condition.