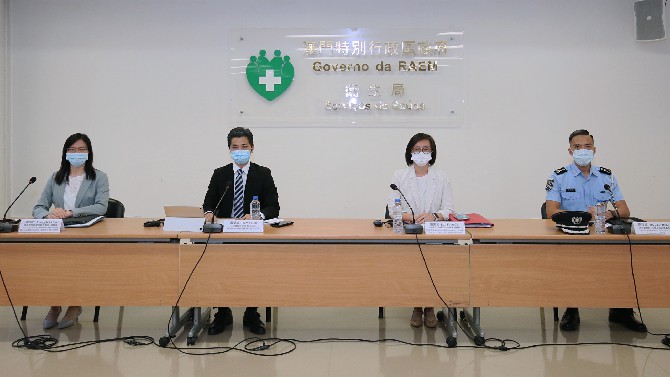 A total of four people, including three residents and one non-resident worker, are suspected to be close contacts with a 23-year-old woman found to be infected with Covid-19 in the neighboring city of Zhongshan, the Novel Coronavirus Response and Coordination Center reported.
According to a detailed explanation from the health authorities during Friday’s press briefing on the Covid-19 situation in Macau, these four people include: a 32-year-old non-resident worker that works in a local elevator maintenance company, and three Macau residents with ages ranging between 28 and 64 years.
All four of these people took public transportation (bus or train) in the city of Zhuhai at a date and time that means they potentially crossed paths with the infected person.
Of the local residents, two are working in local casino companies (Wynn and Galaxy) and the other is staff at the Macau University of Science and Technology.
All four people have been notified by the health authorities and are undergoing a period of health self-management — two at their home address in Macau, one in the city of Zhongshan, and one at a designated medical observation facility in Zhuhai.
During the briefing, Dr. Leong Iek Hou, coordinator of the Health Bureau (SSM) Center for Disease Control and Prevention, explained that there are three close contacts, three other people of general proximity, and 11 close secondary contacts who had contact with the asymptomatic infected person from Zhongshan, totaling 17 people. All of them have already been tested with a nucleic acid test and antibody test. All results were negative and without transmission capability.
Nevertheless, health authorities recommend that other members of the public that were potentially in close contact with these four people pay close attention to their health.