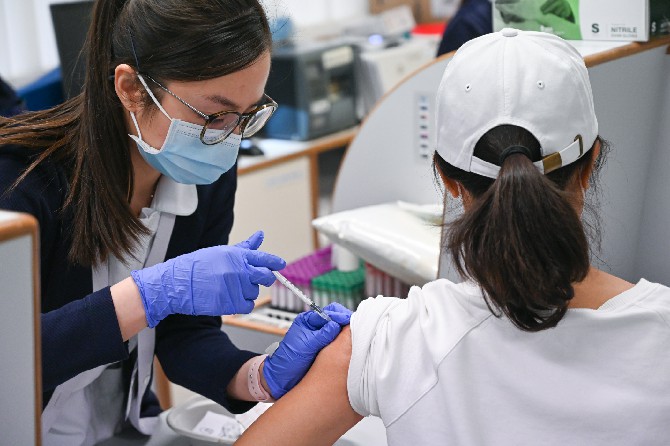 The principle of “Vaccinate the Necessary Groups” will be upheld, and as such more measures to encourage the public to get Covid-19 jabs will be rolled out, Dr Tai Wa Hou, medical director of the public Conde de São Januário Hospital, said yesterday at the regular press briefing.
It was a conclusion reached after a four-day visit to Macau by a team of experts and officials from the National Health Commission (NHC) in mainland China.
“Necessary groups” includes healthcare staff, frontline immigration staff, civil servants, teachers and campus workers.
Tai said the Health Bureau (SSM) will issue a new round of “corresponding” measures with regard to boosting the vaccination rate. “We are now studying and considering these measures,” Tai said.
In Macau, Covid-19 vaccination is administered in a voluntary manner and with informed consent.
The NHC expert team was satisfied overall with the city’s pandemic control and prevention measures, but gave some suggestions to the city for further refinements.
For example, Tai revealed that the expert team had some opinions on use of the polymerase chain reaction (PCR) test. The team offered suggestions to test “key groups,” such as border checkpoint workers, healthcare staff, social workers, public service workers, retail workers and logistics workers.
These groups should be ranked in terms of risk exposure, which will define the frequency of testing required. “The same practice is conducted in mainland China,” Tai said. Once codified, the practice must be “rigorously implemented and monitored.”
Tai revealed that the expert team will compile a comprehensive report after each tour, for the reference of each city or province. Macau will therefore receive a report.
He added that the government will “seriously take reference from the suggestions of the NHC expert team with consideration [to] the situation of Macau.” It will also work to continuously refine and strengthen the city’s disease control and prevention mechanisms.
The visit did not have media sessions because, as Tai explained, the NHC viewed the visit as an internal technical tour and did not wish to include media interviews. In fact, according to Tai, the NHC expert team has been touring around the country without notifying the media.
Tai did not further explain why no notice was given to the press. About a month ago, Chief Executive Ho Iat Seng hinted at the visit, but an exact date was not announced.
At the same briefing, Dr Leong Iek Hou, coordinator at the Center for Disease Control and Prevention, announced that the Health Bureau had set up a backup system for the health code functionality as a contingency for the anticipated mass login on Election Day, September 12.
Voters are required to show their health code upon entry to polling stations.
Leong also explained that Macau has been following mainland China in terms of border crossing measures. As a result, any updates to such measures – even with Hong Kong only – will require the three jurisdictions to sit down and discuss.
“Any updates will be announced in due course,” Leong added.