Covid-19 | Head of China CDC gets injected with experimental vaccine 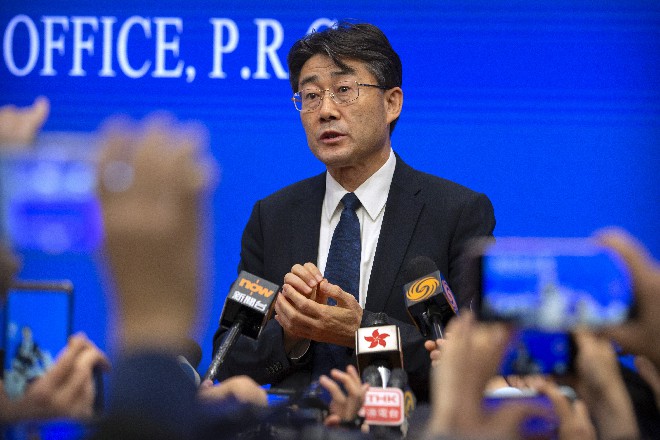 Gao Fu, the head of the Chinese Center for Disease Control and Prevention (China CDC)

The head of the Chinese Center for Disease Control and Prevention says he has been injected with an experimental coronavirus vaccine in an attempt to persuade the public to follow suit when one is approved.
“I’m going to reveal something undercover: I am injected with one of the vaccines,” Gao Fu said in a webinar Sunday hosted by Alibaba Health, an arm of the Chinese e-commerce giant, and Cell Press, an American publisher of scientific journals. “I hope it will work.”
The Associated Press reported earlier this month that a state-owned Chinese company injected employees with experimental shots in March, even before the government-approved testing in people — a move that raised ethical concerns among some experts.
Gao did not say when or how he took the vaccine candidate, leaving it unclear whether he was injected as part of a government-approved human trial. He did not respond to requests for comment.
The claim underscores the enormous stakes as China competes with U.S. and British companies to be the first with a vaccine to help end the pandemic — a feat that would be both a scientific and political triumph.
China has positioned itself to be a strong contender. Eight of the nearly two dozen potential vaccines in various stages of human testing worldwide are from China, the most of any country.
Gao declined to say which of the vaccines he was injected with, saying he didn’t want to be seen as “doing some kind of propaganda” for a particular company.
Last month, Gao was a coauthor on a paper introducing one candidate, an “inactivated” vaccine made by growing the whole virus in a lab and then killing it. That candidate is being developed by an affiliate of state-owned SinoPharm.
The company previously said in an online post that 30 employees, including top executives, helped “pre-test” its vaccine in March, before it was approved for its initial human study. Scientists vehemently debate such self-experimentation, because what happens to one or a few people outside a well-designed study is not usable evidence of safety or effectiveness.
Chinese state media have also reported that employees of state-owned companies going abroad are being offered injections of the vaccine.
Gao said he took the injection to instill public confidence in vaccines, especially amid a tide of rising mistrust that has fueled conspiracy theories and attacks on scientists.
“Everybody has suspicions about the new coronavirus vaccine,” Gao said. “As a scientist, you’ve got to be brave. … If even we didn’t do it, how can we persuade the whole world — all the people, the public — to be vaccinated?”
Andrew Rennekamp, an editor at Cell and one of the moderators of Gao’s webinar, said, “This is a brave thing to do, and it shows his faith in what he believes is the safety of the vaccine and his commitment to the science and to public health.”
Even as China is among the leaders in the global race for a vaccine, it is also striving to overcome years of drug scandals — the latest coming in 2018 when authorities recalled a rabies vaccine and later announced that batches of children’s DPT vaccines, for diphtheria, pertussis and tetanus, were ineffective.
Gao himself had also been under heavy scrutiny for the China CDC’s initial handling of the coronavirus outbreak, both at home and abroad. He largely vanished from public view for months, resurfacing again in an interview with state media in late April.
Recently, Gao has been involved in research on the coronavirus.
As vaccine research continues, China’s CDC is now looking into potential immunization programs, trying to figure out whether to prioritize children, the elderly or healthcare workers, he said.
Gao’s revelations come at a time of heightened geopolitical tensions fueled by the outbreak.
Gao said repeatedly in his lecture that he wanted more cooperation between the U.S. and China, pleading for unity even as relations between Beijing and Washington plummet to new lows.
“We don’t want to have China and the U.S. separated scientifically,” Gao said. “We’ve got to work together.” DAKE KANG, BEIJING, AP