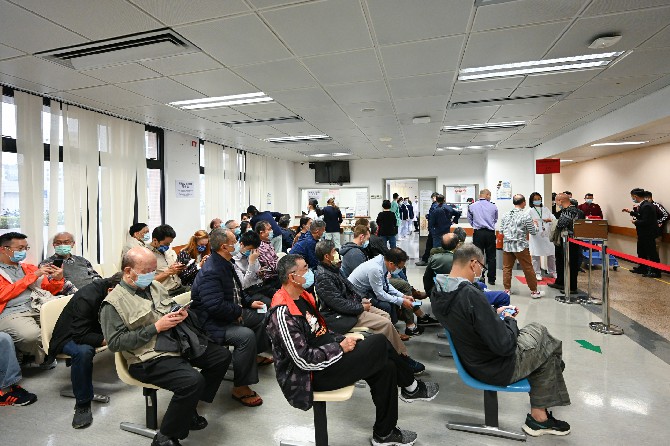 Non-resident workers (TNRs) will be able to make bookings for Covid vaccinations from 9 a.m. today and receive the vaccination from tomorrow, the Health Bureau (SSM) announced yesterday.
TNRs will only be allowed to take Sinopharm’s inactivated vaccine on the first day of vaccine administration. As for the mRNA vaccine, slots will only be opened from March 14.
The health authority will have a quota of 1,000 from the total of 5,000 per day for TNRs. This allotment will not jeopardize the rights of local residents receiving the vaccine. As explained by Dr Tai Wah Hou, coordinator of the SSM’s vaccination operation, “For the time being, we have only seen about 2,000 vaccine administrations per day, so we believe the quota will be sufficient.”
Similar to local residents, TNRs will not need to pay for the vaccine. The arrangement has also been announced in a previous Executive Order on the grounds of “ensuring public health.”
In addition, TNRs taking the vaccine will be insured.
The government is also trying to streamline the vaccination process by separating the type of vaccine available at each of the 12 inoculation stations across the city. The BioNTech vaccine will only be available at three stations: the blood sample collection room at the Conde de São Januário Hospital (CHCSJ), the Ilha Verde Health Center, and the Ocean Garden Health Center. The other stations will only provide Sinopharm’s inactivated vaccine.
Meanwhile, the health authority is making special arrangement for senior vaccine recipients. Older recipients who are aged 60 years and above will only be catered to at the CHCSJ.
In addition, following a previous Executive Order, unless under special conditions, this senior group will only be allowed to receive the mRNA vaccine. Older vaccine recipients can only receive the Sinopharm vaccine if they have their health condition approved by a government medical professional immediately before receiving the vaccine and if they have a higher risk of contracting the virus in their daily life.
Tai stressed that seniors will be treated in a dedicated manner even at the time of booking. “At the time of booking, they will be brought to a special page for preliminary evaluation of their suitability,” Tai explained. “Following that, at the hospital before they take the vaccine, their health condition will be assessed by doctors-on-duty.”
For example, doctors at the stations will ask questions to assess patients’ health condition and background. If available, the doctors may also refer to medical records for a more informed assessment, Tai said.
As of 4 p.m. yesterday, nearly 50,000 bookings have been made to take either of the two brands of vaccines, with about 43,000 for the Sinopharm vaccine and about 6,200 for the BioNTech vaccine.
Out of these numbers, as of March 7, about 21,000 vaccines have been administered so far across the city, with nearly 20,000 being the Sinopharm vaccine and about 1,700 being the mRNA type.
Residents who have completed the two doses of Covid-19 vaccine will have their records shown on their health code.

SSM clarifies
on ‘side effects’
When questioned how the public medical team can ensure the safety of jab takers, Tai stressed that the jabs available in Macau has had their safety scientifically proven. However, he remarked that the vaccines being safe does not equate to the total absence of adverse events following immunization (AEFI), a term officially used by the WHO.
“The rate of natural mortality exists,” Tai said. “Regardless of the act of vaccination, the society sees death during a given period of time.”
He added that so far, the health authority was not convinced that mortality elsewhere was closely related to the vaccine. He admitted that senior individuals and those with chronic diseases do not have the urgency to take the jab, given Macau’s current condition.
Meanwhile, Dr Leong Iek Hou, coordinator at the Center for Disease Control and Prevention, stressed that medically, AEFI is different from side effects from vaccination. The former describes any medical happenings following inoculation, which may not be related to the inoculation itself.
Leong added that a taskforce has been set up to respond to AEFI related to the new vaccine.
For the time being, 21 cases of AEFI have been recorded on the Sinopharm jab and three on the BioNTech shot.