In crackdown on celebrity, China bans stars’ kids from shows 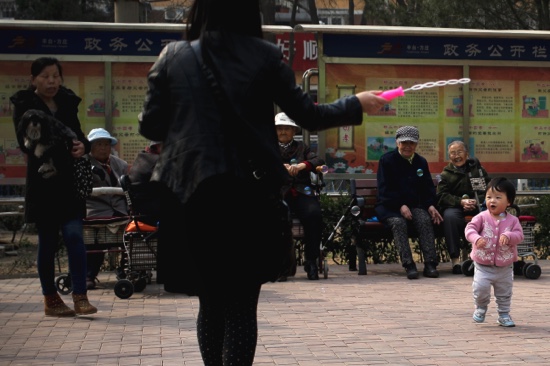 China is banning the children of famous entertainers from appearing on hugely popular reality shows, as the country continues efforts to try to prevent the manufacture of child stars.
The ban by the government’s media regulator also covers appearances by the stars’ children on chat shows and reports about them on entertainment programs, the official Xinhua News Agency reported yesterday.
Reality shows featuring attractive stars and their well-dressed, fashionably coifed and often somewhat precocious children traveling or performing tasks together have grown extremely popular with Chinese viewers in recent years.
However, apparently concerned with the growth of celebrity culture, the State Administration of Press, Publication, Radio, Film and Television ordered in July that producers of the dozens of reality shows on satellite channels cut back on appearances by minors and tamp down parts of the shows seen as attempting to make them stars on their own.
Xinhua cited the administration’s latest order as saying, “Reality shows should pay attention to strengthening protection over minors and endeavor to reduce the participation of minors.”
It said reality show producers have been ordered to drop the “mistaken notion” that they should use well known entertainers to attract viewers. “Do not permit shows to become venues for displaying fame and wealth,” Xinhua cited the order as saying.
A staffer at Hunan Satellite, whose “Dad Where Are We Going?” is one of the biggest hits in the “celebrities and their children” genre, said the station was aware of the administration’s order. Speaking on condition of anonymity because she wasn’t authorized to speak to reporters, she said a decision had not yet been made on whether to order another season of the program.
Chinese media regulators say they see their task as reining in programs seen as overly materialistic or encouraging the worship of celebrities who might compete with role models promoted by the ruling Communist Party.
Viewers have increasingly turned to programming on more independent satellite television stations and the Internet, where regulators have sought to impose stronger control over live streaming programs usually featuring young women chatting, playing video games or simply going about their everyday tasks. Christopher Bodeen, Beijing, AP