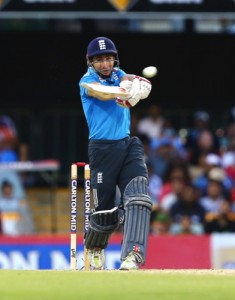 Steve Finn and James Anderson shared nine wickets for 51 runs as England rolled India for 153 to set up a nine-wicket win in the tri-series one-day cricket international yesterday.
Finn took a career-best 5-33, and Anderson, returning from injury, took 4-18 as England bowled out India in only 39.3 overs after it won the toss and batted at the Gabba Ground.
Ian Bell then scored 88 and James Taylor 56 in an unbroken 131-run partnership which carried England past India’s total in the 28th over.
India remains winless in the tri-series after its three-wicket loss to Australia on Sunday, while England has a bonus-point win and a loss ahead of its second clash with Australia at Hobart on Friday.
Bell and Taylor both made ducks in England’s first-up loss to Australia but found form yesterday. Bell produced his 32nd ODI half century, taking his 88 runs from 91 balls, while Taylor scored his third, facing 63 balls, and hitting Akshar Patel for four for the winning runs.
Finn and Anderson set up the win with their outstanding bowling performances which fully exploited the deceptive bounce of the Brisbane pitch, which India captain Mahendra Singh Dhoni thought ideal for batting.
Opener Shikhar Dhawan was out to Anderson in the third over of the match when India was 1-1, and that set the tone of an innings which hurried towards its end with only brief and feeble resistance. Only Stuart Binny, who top-scored with 44, Dhoni, who made 34, and Ajinkya Rahane, with 33, made any impact for India on the scoreboard.
Binny also took 1-34, dismissing Moeen Ali for 8 at 25-1, during England’s reply.
Rahane and Ambati Rayudu (23) put on 46 for the second wicket to temporarily steady the India innings, and give it some semblance of order after Dhawan’s early departure. But Finn claimed his first wicket when he dismissed Rahane in the 15th over, and from that point he bowled with confidence and control to disassemble India’s batsmen.
Rahane’s dismissal was typical in the India innings: He tried to play a forcing shot down the ground from a Finn delivery which pitched on an awkward length. The ball hit higher on the bat than Rahane expected and the ball ballooned to James Taylor at mid-on.
Finn was able to exploit that length throughout the match, and India’s batsmen were unable to counter a concerted onslaught from England’s seamers.
“It was important that we bounced back after the disappointment of losing the game (against Australia) at Sydney,” Finn said. “We came out and responded, and did really well.
“It was a very good toss to lose. We were going to bat as well if we won the toss.
“It was important that we held our lengths. Balls about waist high were very hard to hit and we could build pressure by holding that length, and it made them play loose shots. We had a bit of luck and there were a few good balls in there as well.”
Finn said the ball did a little bit when it was new but also sometimes held up on the Gabba pitch, and created timing issues for the batsmen. AP