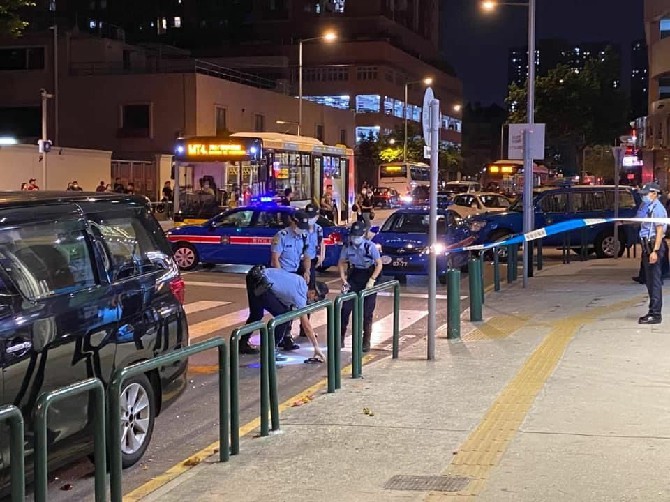 An unemployed man suddenly lost faith in a deity in which he previously believed before destroying the statue of the deity he had at home and throwing an incense burner onto the street, the Public Security Police Force (PSP) revealed yesterday at a regular press briefing.
Besides the incense burner, the man also threw a laptop computer onto the street.
The man is a local resident surnamed Lao, aged 45 years.
It was also revealed that his wife, in her 40s, and a daughter, less than 10 years of age, were beaten by him before the items were thrown. Both sustained injuries.
At 10:30 a.m., May 8, the PSP received a report about falling objects. Arriving at the scene on Rua da Doca Seca, officers found a broken laptop computer and an incense burner. The objects caused damage to three private cars, two heavy motorbikes and a truck.
Ten minutes later, the PSP received a report of a domestic disturbance on the same street. Officers attending the incident discovered a broken window in the apartment, which drew their attention to the case of the falling objects.
It was later revealed that Lao went drinking that night and became overwrought. He claimed that he had lost faith in the deity in his apartment and smashed the statue upon the floor.
However, he claimed that he had no memory of throwing other objects out the window.
The matter of the physical assault has been referred to the Judiciary Police (PJ).
In another case, a local clinic on Rua de Francisco Xavier Pereira was reported to have its glass façade found broken when the owner was about to open on the morning of May 9. The owner called 999 to report the breakage.
During its investigation, PSP officers obtained surveillance camera footage from a nearby establishment and managed to trace the suspect, a local male taxi driver aged 32.
Police discovered from the footage that in the early morning on May 7, the suspect, along with several of his friends, were loitering along the sidewalk opposite the clinic. Later, the suspect threw a glass bottle towards the front of the clinic. The group then left the scene in a taxi.
After the police arrested him, the suspect admitted to the incident. He confessed that at about 5 a.m. on May 7, his friends fell into a quarrel with several strangers whom they met on the street.
The suspect tried to intervene but was unable to control the situation, and threw the bottle at the clinic. He said he was not aware of any damage being caused.
Based upon his statement, he was referred to the Public Prosecutions Office for further investigation.
Yesterday, the PJ revealed that eight cases of credit card fraud have been reported this month so far. The victims’ cards were used either online or offline to make transactions in various currencies, ranging from the local Pataca to Pounds Sterling.
Losses ranged from as little as MOP110 to as much as USD1,500 (about MOP12,000) and GBP1,500 (about MOP17,000).