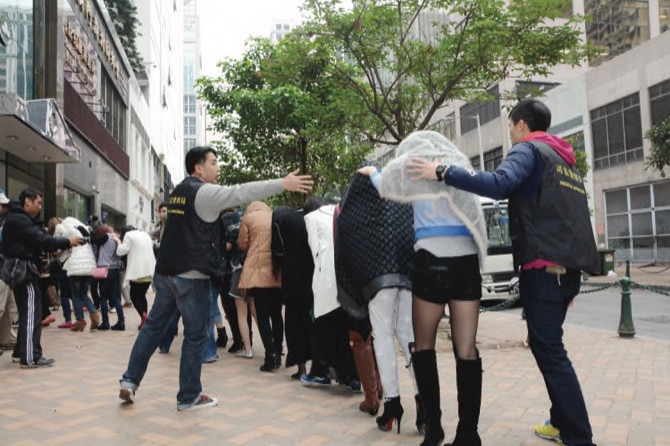 In an apparent and unexplained change of approach, Macau police authorities are now charging the suspects in three recent prostitution cases for illegal work.

This new approach is a departure from the previous system in which the main stakeholders being held accountable by the judicial authorities were the organizers and facilitators of the prostitution work, including apartment owners.

Now, police are seeking the accountability of six sex workers from mainland China, and accusing them of carrying out illegal work in Macau.

This came after yesterday’s joint police press conference, held at the Judiciary Police (PJ) headquarters in which the Public Security Police Force (PSP) spokesperson presented the three cases, all of which he said the police discovered on April 11.

According to the spokesperson, the cases occurred in different locations of the city: Rua de Bocage, Rua de Erva and Rua da Barca. However, the cases were similar in that the police found two sex workers at each location and the six women had arrived from the mainland and were charging the same amount (MOP200) for their services.

Five of the six women told the PSP that they were paying a daily rental fee of HKD600 for the use of the apartment, while the sixth said she was paying HKD550 per day to rent the apartment from which she was working.

The PSP spokesperson noted that the force decided to act on these cases in response to complaints made to the police saying that people were performing unlawful activities in those locations.

When questioned by the police, the women revealed they advertised their services via several channels, but mostly through word of mouth and a website from the mainland.

The six women, whose ages range from 29 to 40, had all arrived in Macau very recently, with the longest-staying of them accruing just five days in the region, after arriving via the airport. The others arrived via the Border Gate checkpoint.

They claimed to have collectively attended to a total of around 30 clients, having earned a collective sum of MOP6,000.

The PSP also informed that since the cases involved instances of illegal work, they have all been forwarded for follow-up with both the immigration authorities and the Labour Affairs Bureau, as all the women stand accused of breaching the administrative regulation that dictates the conditions for non-residents to work in the Macau SAR.

Questioned on the topic by the media, the PSP spokesperson also revealed that none of the apartments used by the women are suspected to have been used as an illegal accommodation venue. Accordingly, the police authorities have decided not to forward any of the cases to the Macao Government Tourism Office for analysis. None of the owners of the apartments are being charged.