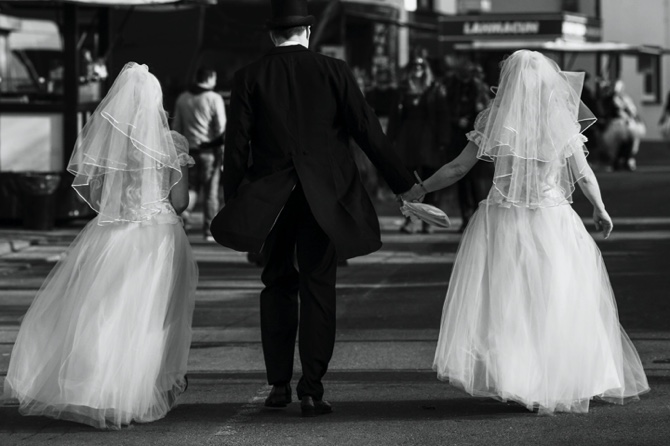 A 73-year-old male Macau ID holder legally divorced his wife in order to wed two of his daughters-in-law, in the process claiming himself father of his own two granddaughters. Except for the man’s original wife, all of the women in this confusing familial case were from the mainland, and these marriages were conducted with the purposes of obtaining local identification permits and thereby residency for them.

The case, disclosed during a police press conference yesterday, was referred to the Public Security Police by the Identification Bureau (DSI).

The family is surnamed Leong, with the senior Leong now 73 years old and working as a security guard. His first ex-wife, surnamed Lam, is 69 years old, and is reported to be unemployed.

Leong has two sons with Lam, the younger of which is involved in this case. The son is now 38 years old and is also a security guard but does not have Macau residency as he originally lived in the mainland. This junior Leong has a partner in a de-facto marriage with a woman surnamed Huang, who is also from the mainland.

De-facto marriage is a type of legal relationship in Macau which does not require registration and is confirmed naturally under certain conditions. It is less formal than a civil union.

The senior Leong and Lam were married in the mainland in 1972. During their marriage, they gave birth to their two sons and a daughter in the mainland. During the 1980s, Leong snuck into Macau and obtained a Macau ID. He sought to reunite with Lam, who also received Macau residency afterwards while their children remained in the mainland.

In 1994, their first son was married in the mainland. His wife, surnamed Zeng, gave birth to a daughter in Macau in a condition of visa overstay. Zeng registered the girl with an unknown father on the birth certificate.

In 2003, the senior Leong submitted a fraudulent paternity certificate to the DSI, which claimed the girl to be his own daughter. The granddaughter was subsequently granted Macau residency.

Zeng even divorced her husband and married her father-in-law in 2007, which brought her a legal Macau residency. With the goal of residency achieved, the pair divorced in 2008.

In 2013, Leong senior married the then-girlfriend, surnamed Huang, of his younger son. The son and Huang had a baby girl in 2015. Leong senior once again claimed to be the father of his granddaughter which meant that both mother and baby received local residency.

The police made a breakthrough in the case only when the younger son confessed. The suspects are now being investigated by the Public Prosecutions Office.

The police have also learned of a similar case that involves an entirely different family.

Luo and Ou-yang were originally mainland residents and were married in 2000. Luo later gave birth to a girl in Macau while overstaying in the terriotory. An uncle of the girl, a Macau ID holder, claimed himself to be the father and use this status to obtain local residency for the girl.

Luo gave birth to a boy in the mainland in 2002 before she divorced Ou-yang in 2013. Just months later, she married her sister’s boyfriend, a Macau resident, and applied for Macau residency for herself and her son.

Both Lam and Luo confessed to the police about their fake marriage. They are both under investigation by the Public Prosecutions Office.