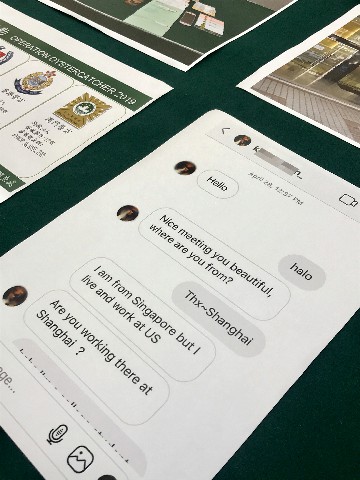 A criminal organization that sought to scam people through online communication websites and mobile applications has finally been exposed in a joint operation between Macau, Hong Kong, Singaporean and Malaysian police forces.
A Judiciary Police (PJ) spokesperson made the announcement yesterday afternoon during a special press conference from the force to reveal the details of the case.
According to the information provided by the spokesperson, the criminal group was operating in several jurisdictions, including Macau, and was headed by Nigerian nationals.
In the special three-day operation held from November 18 to 21 and led by Malaysian authorities, 22 people in total were arrested. Four in Macau were arrested, including three women and a man whom the PJ suspected was the leader of the Macau operations. The people arrested in Macau were, the police informed, two local women aged 28 and 29 years old as well as a Filipino national. The man now in the custody of local authorities is a 35-year-old Nigerian national, whom the PJ said was one of the main members of the group.
At the same time, authorities in Malaysia arrested a total of 18 other people, 10 women and eight men, including the man who is believed to be the mastermind behind the syndicate.
The group operated via social media and online dating apps, creating fake user accounts with which they would search for victims.
After establishing contact and a virtual relationship with the victims, the scammers would give a range of excuses and request money for loans, investment opportunities and similar reasons.
After the victims acquiesced, the group’s operatives would transfer the earnings into bank accounts in several jurisdictions, which they also had to open and maintain, sending all the usernames and passwords for online banking access to the heads of the group in Malaysia.
There are reports and evidence of the group’s operation going back to 2015 at least, and upon preliminary evaluation, taking into account the complaints made by victims, they are suspected of having swindled a total sum of over 20 million patacas in 156 known cases.
The majority of victims were aged between 25 and 44 years old and were seduced by the scammers’ high-status profiles and the expensive gifts some eventually received.
In addition to this scam, the police also found that the group had pretended to be staff members from parcel delivery companies on several occasions, asking for compensation to release parcels with expensive items that were shipped to the victims.
Numbers quoted by the PJ spokesperson show that there were 40 cases of this type of scam reported between the end of 2018 and September this year. All were attributed to this group.
The PJ also said that, of the 156 cases that are under investigation or have been concluded, 69 occurred in Singapore, 54 in Hong Kong and 33 in Macau.
Of the cases investigated locally, the PJ said they had already concluded 12, noting that the victims were all local and that there were connections with Hong Kong in one case, and connections with Malaysia in three of the cases.
The total sum lost by the local victims across these 12 cases amounts to 6.1 million patacas.
While the other 21 cases are still under investigation, the PJ also warned the population of the risks of being involved in this type of relationship and called on other potential victims of this group to present their complaints to the force.