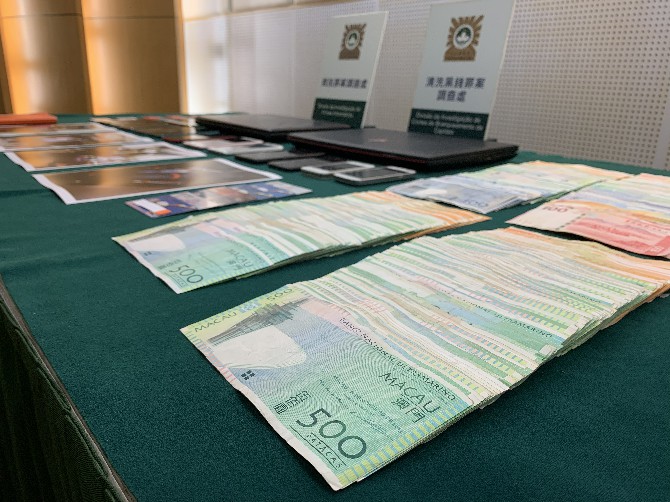 Police in Macau and Hong Kong have busted an online scam syndicate, arresting four suspects in Macau and three in Hong Kong, the Judiciary Police (PJ) announced yesterday.
It was estimated that the case involved more than HKD20 million.
The four suspects arrested by the PJ include a Malian man, surnamed Mamadou. The other three are his girlfriend, an Indonesian surnamed Pujiati, a Burmese man surnamed Aung and a local woman surnamed Lei. Their ages range from 29 to 43 years.
They were charged by the police for conducting a scam of a relatively large amount and money laundering.
The arrests took place on July 6 in various locations around the city. While conducting the arrests, the PJ found and seized a number of items at Mamadou’s residence, including MOP300,000 in cash, two ATM cards, a dozen or so cellphones, a computer and several SIM cards. Similar materials were also found and seized at residences of the other two suspects.
At least five cases of online scams, according to the PJ, are related to this syndicate, involving at least seven victims and about MOP400,000. During their investigation, the police also uncovered more than 100 bank transfers amounting to approximately MOP1.1 million from unexplained sources. This leads police to believe that there are further victims who have not reported their loss to the authorities.
According to the police, Mamadou refused to cooperate with the investigation, following his arrest, neither could he explain the source of the funds.
By contrast, Aung admitted to the crime and confessed that he provided his bank account to receive the funds at Mamadou’s request.
Pujiati’s role was to look for suitable banks at which to open accounts to deposit the scammed funds.
Meanwhile in Hong Kong, the Hong Kong Police Force seized cash, bank account details, electronic equipment, and other items. The syndicate, which is not connected to the one in Macau, is linked to at least 10 cases involving HKD20 million of funds. The group is linked to at least three cases in Macau, involving HKD1.8 million.
The PJ justified the need for this joint operation, saying that such crimes have become more common recently, and concern multiple Asian jurisdictions . The joint aspect of the operation was mainly the exchange of crucial intelligence.

Arrest for driving on suspended license
In another case, a local male student, aged 20, has been accidentally discovered for driving while under a suspension.
On Tuesday morning, the student had a collision when he rode his heavy motorbike to school while his driving license had been suspended by a local court.
The man crashed into a public bus on Amizade Bridge and was stopped by police officers as part of the investigation, during which all parties present their driver’s licenses to the officer as a matter of routine.
The reason for his suspension was that he was involved in another car accident, which caused an injury to another person. The local court sentenced him to 10 months suspension from driving from February to December this year.
When police officers questioned him, he confessed that he took the risk of driving that morning because he was in a rush to get to the university. In order not to arrive late, he decided to ride his motorbike.
He was charged with aggravated disobedience and is now at the Public Prosecutions Office for further investigation.