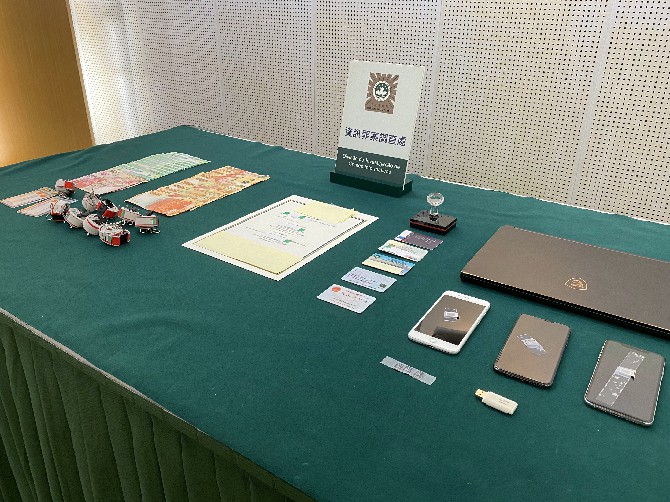 A young local couple was yesterday detained by police on suspicion of having committed multiple crimes including document forgery and fraud, the Judiciary Police (PJ) revealed yesterday at a specially-called press conference.
According to a PJ spokesperson, the case was opened after a Hong Kong woman filed a complaint against a 25-year-old man to the Commission Against Corruption (CCAC).
The woman, who drove from the neighboring region and underwent a 14-day quarantine period in Macau in order to file the report, said that the man showed her documents in which he claimed to be a high-ranking civil servant in Macau. The CCAC then referred the case to the PJ for investigation.
Upon being detained for questioning, the man, who is said to be a chauffeur, admitted that to earn the trust of women in Hong Kong he forged several documents, including name cards from public entities in Macau, in order to pose as a high-ranking official.
He also forged other valuable documents such as university diplomas and other documents pertaining to academic qualifications.
The PJ spokesperson said that the force is not yet certain of the man’s motives for attempting to entrap women in the neighboring region, but according to information collected so far, he attempted to attract at least 30 women and has maintained a relationship with at least four of them.
Local police also found, using the man’s computer and mobile phone records, that he has previously pretended to be a female from Hong Kong, and, while supposedly maintaining a long-distance relationship, deceived at least one local man into giving him money, ostensibly to meet the healthcare expenses of sick relatives.
According to these records, this local man was defrauded of at least 300,000 patacas over five years.
As the case is still under investigation, the PJ has not so far disclosed whether the man defrauded any of the Hong Kong women, or whether he used their information to impersonate them while attempting to defraud other men.
The accused man’s wife, a 23-year-old, who is said by the PJ to be unemployed, was found to have three forged identity documents from the mainland in her possession, which she admitted to having bought on the mainland.
The woman said that she dedicated herself to parallel imports over the border from Zhuhai to Macau and that she had purchased the false documents in order to present them from registration while unloading the items at a collection point in Macau.
While the man has been charged with six offences – document forgery, special value document forgery, the unlawful practice of a profession, fraud, computer fraud, and scamming – the woman is currently only accused of special value document forgery. Both suspects have admitted to the crimes.
The PJ will continue to investigate the case to discover whether there are additional crimes, as well as any other victims or suspects.