Crisis management is a matter of ‘not dropping the ball’ 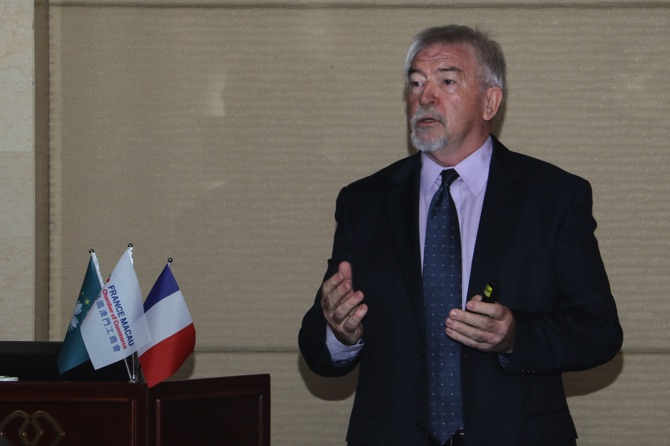 The security expert, who was invited to speak at the session, was addressing the issues and importance of having a proper crisis management system, as well as plans to prevent damage that usually arises from catastrophic events. He noted that “major issues happen because people forget that [they] happen and easily ‘drop the ball’,” a statement about forgetting the experience gathered from previous events and not adjusting plans to change and new realities, or worse, not having a serious plan at all.

Addressing specifically the problems caused by Typhoon Hato and the response to it, specifically commenting on  the intervention of private companies who provided resources which the government did not possess, the expert said: “There is nothing wrong with the private [sector giving assistance] as the private sector has responsibilities to the people and to the government in helping.” However, he additionally remarked that it is up to the government to promote the training of personnel: “In the best case scenario, the government would know what is available within the private sector or what it can call on to establish [a system]. If we need to call this equipment [or service] how are we going to do this? Who to speak to? Who to contact? Are you willing to give it to us? And then possibly test that [thorough drills and exercises].”

Questioned by the Times on the “notion of risk,” Langton said, “it’s really education, educating the public not to go into dangerous situations.” This comment appeared to address whether it is the role of the government and media to send out alert messages to citizens if a major storm approaches. The expert noted people tend to quickly forget catastrophes. However, he held that campaigns must be held to promote safety, giving the example of the use seatbelts, which is now an internalized standard.

“Until now that we wear it without even thinking about it, it’s second nature to us,” Langton said, adding that the government should now use the example of Hato to remind people to “stay away from underground garages” during flooding or similar natural disasters.

To help build public confidence in the system, he said that the Macau Meteorological and Geophysical Bureau should clearly explain what they are doing.

“We are raising the number 8 signal because it is based on the wind speed, which can be reached and felt in some particular area of the territory and not on the others,” he remarked, “Weather forecasting is not an exact science and it will always look as though it failed someone in a particular region or area.”

“Most people don’t see risk as an issue,” the security expert said, adding, “of course there will be always people that will ignore [those warnings] but at least they [the government] have done their duty.”

He said he believed many of the casualties occurred due to a lack of awareness on the part of the public: “They had no experience of going into an underground space with large quantities of water [coming in]; it probably never happened [before].”

Questioned on his opinion on the response of the Macau government to typhoon Hato, he said he did not wish to comment too much as “I am not in possession of all details […] but I think I can say it was questionable.”

Starting from October 20, the former France Macau Business Association (FMBA) has won official recognition as a member of CCI France International (Chamber of Commerce and Industry). The France Macau Chamber of Commerce (FMCC) unveiled its new identity during a ceremony on Friday in the presence of its Honorary Chairlady, Pansy Ho, and Consul General of France in Hong Kong and Macao, Eric Berti. During her speech, Ho underlined the notable growth in bilateral ties between France and Macau, and the impact of the new FMCC in joining hands with French Chambers across the globe as well as its integration into the French international network. Berti emphasized in his speech the special relationship between the Consulate and the new Chamber, and congratulated the recent achievements of the FMCC’s Executive Board and membership.

During the talk held by the France Macau Chamber of Commerce (FMCC), in which security expert James Langton addressed the issues of risk and hazards that can potentially create problems for people and organizations, the speaker mentioned that there are two kinds of hazards, natural and human. In regard to the latter, he said changes in the last few years regarding terrorist and other potentially hazardous acts demand a change in the contingency plans of governments, corporations, and other organizations.

Remarking on acts of terrorism, Langton mentioned the trend of using vehicles; a modus operandi that in his experience has been causing lots of problems within corporations, regarding how to prevent events of this kind from happening, even leading to legal disputes.

“As soon as you have a truck in your hands you have a potential weapon,” he said, noting that the problem of who owns the space and who should be responsible to create some form of solution to protect pedestrians from these acts has given rise to many questions among legal departments, especially from big corporations, shopping malls and hotels.

Another of the topics addressed relates to the recent attack that occurred in the US gambling mecca, Las Vegas, where a shooter used a Mandalay Bay hotel window to perform an attack that killed at least 59 people and injured about 500 others.

“This raised another issue that is a ‘game changer’ especially for lawyers. Who are we going to sue [over this]?” He asked, adding that the latest information on the case indicates that the gunman identified as Stephen Paddock might have benefited from being a “high roller” at the casino-hotel to get “special treatment” and to “be able to carry large bags […] into the hotel without being questioned or reported.” Another potential advantage was “to have been able to keep the room-service and cleaning staff away from room” on the basis of this special treatment.

Another of the new forms of hazard is transmitted via the media and the Internet and has to do with reputation.

As Langton recalled, “the first crisis comes usually over different causes but the second and third come [respectively] by the media and social media,” that can cause damages on reputation and significantly drop the value of companies.