Cupid strikes for Hong Kong career women on the mainland 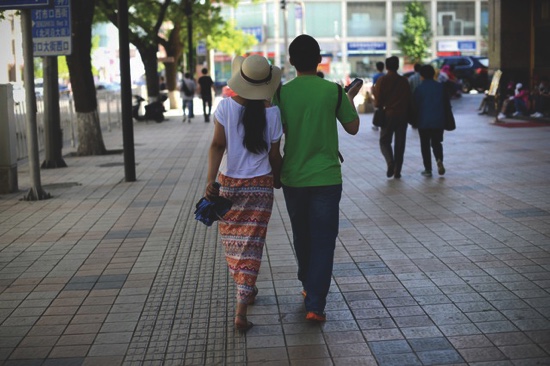 After a few failed relationships in her home city of Hong Kong, Doreen Cheung did not expect Cupid to strike when she moved to Shanghai in 2002.
A PR manager then in her late 30s, Ms Cheung was attracted by better job opportunities in China’s most westernized city. As a “leftover woman” — a term referring to highly educated, well-paid but unmarried Chinese females in their late 20s or older — she felt her chances of meeting someone were slim. “I was almost 40. The age became a big problem. It’s already very late and hard for me to find someone suitable,” she told Financial Times reporter Julie Zhu in Hong Kong.
But things changed when she met Mr Chen, newly returned to Shanghai after working in New Zealand. They fell in love and married two years later.
Back then, it may have been rare for Hong Kong women to look for love on the Chinese mainland. Traditionally, older and poorer Hong Kong men went to China to find younger brides. But in recent years, according to the FT story, thousands of highly educated Hong Kong women have followed in Ms Cheung’s footsteps.
Nearly 7,500 women from Hong Kong married Chinese men in 2013, a threefold increase from 2003, the paper revealed. Likewise, the number of cross-border marriages registered in Hong Kong accounted for 38 per cent of the total in 2013, compared with 32 per cent 10 years earlier.
It is not hard to understand why women look for love outside of Hong Kong, marriage brokers and sociologists conveyed to the broadsheet. Hong Kong is a tough marriage market for women because of the city’s skewed gender ratio — 876 males for every 1,000 females, a gap predicted to worsen to 712 to 1,000 by 2041.
“Men are in a short supply,” Paul Yip, an expert on population policy at the University of Hong Kong, told the FT. “And men always like to marry down, women always like to marry up . . . what we will see is an increasing number of women who remain single.”
China’s economic boom — and with it, its growing number of wealthy men — has also encouraged women to consider partners from the mainland.
Renowned for being independent and selective, says Sandy To, a sociologist at the University of Hong Kong, women from the territory tend to favor Chinese bachelors with decent education, particularly haigui or “sea turtles” — Chinese who have studied overseas and returned to China.
More than 400,000 haigui returned to the motherland last year, the newspaper stated, according to Chinese government data. “They speak fluent Englsih, have the global perspective and cultural sophistication,” she says. “Their background is similar to that of professional Hong Kong women. They would click.”
Moreover, according to the Financial Times, there could be a political and social benefit to these marriages. Tensions between Hong Kong, anxious to maintain its status as an international metropolis, and mainland China have risen in recent years, most noticeably with last year’s pro-democracy protests.
Such cross-border liaisons are believed to help defuse conflicts and enhance mutual understanding between two sides. “Of course, this [cross-border marriage] brings us closer, says Mr Yip. “What else could happen? They can influence us and we influence them too. We don’t need to be paranoid about this.”
But, Mei Ling Liu, founder of Hong Kong Matchmaker, an elite dating agency, voices a note of caution. Although China and Hong Kong are geographically close, she warns that “the core values and social mentality are different”.
Some cultural differences may be difficult to overcome. The government data, though comprehensive, do not include divorces of cross-border couples.
“Hong Kong people speak terrible Mandarin and (most) Chinese speak terrible Cantonese,” Ms Liu says. “When you talk about business, you can struggle and manage. When you talk about love, you really need to communicate.”
“We don’t have a big problem in our daily communication,” says Ms Cheung of her relationship. But her accent still marks her out as a Hong Kong native. “He (my husband) sometimes makes fun of me.” MDT/FT