David puts on a squash clinic for Olympic watchers 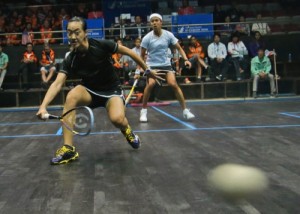 Nicol David has done just about everything she can to win over the Olympic movers and shakers. Now the squash luminary from Malaysia is hoping her performance in the finals at Asian Games will add weight to her sport’s case for inclusion in the Olympics.
A packed venue was treated to two tense, high-quality gold medal matches yesterday: seven-time world champion David was taken to four games before claiming her fourth women’s individual Asian Games gold; and Abdullah Almezayen won Kuwait’s first gold medal in squash when he beat India’s Sourav Ghosal in five.
“I hope the display that we’ve given will get the IOC’s attention,” David said. “We have four of the top 10 players playing here which shows how important multi-discipline games are for Asian countries.
“With the Olympics… it’s of course a dream to be in it for any player. Hopefully we’ll have a chance later this year and the IOC will be willing to open the doors for squash in the Olympics.”
Squash has long lobbied for inclusion at the Olympics, but missed out on inclusion in initial voting for the 2020 Olympic program. New IOC President Thomas Bach has indicated a “more flexible” approach to the Olympic program beyond 2016 may be considered at an executive board meeting in December. And that has given sports such as squad, baseball and softball renewed hope.
Almezayen, who exceeded his own expectations by beating top-seeded Ghosal, urged the IOC to think about the popularity of his sport around the world when it next considers the sports program.
“Just see at the crowd and the game’s popularity,” the Kuwaiti said. “Hopefully squash will be there at the 2020 Olympics and we’re looking forward to it.”
Ghosal, who squandered a match point in the third set, reiterated David’s thoughts about the quality of play and its possible impact on IOC members.
“Of course, it is sad to lose but it is a privilege to have played such a match. I’m proud of the way we played and this match will be remembered for a long time,” said Ghosal, who was bidding for India’s first squash gold at the games after winning bronze medals at Doha in 2006 and at Guangzhou in 2010.
The players were backed by Olympic Council of Asia president and IOC member Sheik Ahmed Al-Fahad Al-Sabah, who was at the venue to watch his countryman Almezayen in action.
“Squash has become a very popular game and is played almost the world over,” he said on the sidelines of the finals. “It could find a place in the future, it all depends on the 2020 vision and how the IOC moves forward.” C. Rajshekhar Rao, Incheon, AP