This Day in History: 1972 Survivors found 10 weeks after plane crash 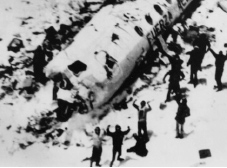 The Chilean Air force has found 14 survivors from a plane that crashed in the Argentine Andes over two months ago.
The first news that anyone had survived came when two of the passengers reached civilization yesterday after a 10 day trek to get help.
The two men, Roberto Canessa and Fernando Parrado then contacted the emergency services and directed them to the wreckage.
Six survivors have been flown out by helicopter to a field hospital in San Fernando.
The other eight are on the mountain receiving medical care until weather conditions allow them to be rescued.
The Fokker “Fairchild” vanished on its way from the Uruguayan capital Montevideo to Santiago in Chile on Friday 13 October.
Its passengers included the Christian Brothers, a catholic Uruguayan rugby team and their friends and relatives.
Team spirit
Despite suffering from cold and hunger, 19-year-old Roberto Canessa and 21-year-old Fernando Parrado insisted on helping the rescue effort.
The two men had trudged for 10 days in arctic conditions before finally coming across some herdsmen in the Andean foothills.
Mr Canessa, a second year medical student, explained that 25 of the 45 passengers survived the initial crash.
The pilot had to make an emergency landing in a snowy valley after the plane hit turbulent weather conditions.
A further eight people died when an avalanche hit the wreckage two weeks after the crash.
The men spoke of a deep team spirit and a determination not to give up.
Mr Parrado, a mechanical engineering student, described how he watched his mother and sister die.
“They remained there in the snow, but I knew I had to live. Before this I had lost a little faith. Now I have regained it, very deeply. God heard our prayers.”
The survivors lived on chocolate bars, sweets and light food they found in luggage.
They melted snow for water and used the aircraft’s seats to make bedding.
They huddled inside the aircraft and used whatever they could find to plug up holes in the fuselage to keep the cold out.
Roy Harley, an electronics student managed to get a transistor radio to work.
Mr Canessa said, “After some tinkering we managed to hear radio stations. On the eightth day we heard the sad news that our search had been abandoned.”
He said they had tried in vain to attract the attention of rescue planes as they flew above the snow camouflaged wreckage.

Four days after the rescue, a Santiago paper alleged that the survivors became cannibals to ward off starvation.
The group confirmed that they ate human flesh at a press conference two days later.
All the survivors were aged between 19 and 26 except a 36 year old business man.
Roberto Canessa made an unsuccessful bid for the Uruguayan presidency in 1994.
The story of the ordeal was published in a book called “Alive!” by Piers Paul Read.
A film based on the book was released in 1993, starring Ethan Hawke.
Fourteen of the survivors retraced their fateful flight route on the 30th anniversary in 2002.