This day in history: 2000 Fuel protesters rally for tax cut 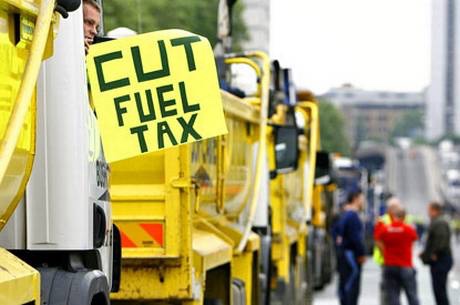 Convoys of lorries and tractors have converged on the capitals of England and Scotland to mark the 60-day deadline for government action to cut fuel tax.
Both demonstrations passed off peacefully.
The biggest was in London where protesters rallied in Hyde Park.
About 350 vehicles were stopped by police from entering the centre of the city.
Drivers parked their vehicles on the hard shoulder of the Westway on the outskirts of central London before making their way on foot to the demonstration.
In Edinburgh, about 150 vehicles from as far away as John O’Groats converged on Princes Street in the city centre at 1200 GMT.
Both rallies were much smaller than expected.
Many dissenters appear to have been placated by Chancellor Gordon Brown’s pre-Budget report last week, in which he made some concessions on fuel prices and road tax.
Police initially said marchers in London would be kept away from the Houses of Parliament.
But they agreed to allow People’s Fuel Lobby representative Andrew Spence to Downing Street with a tractor, a lorry and five other protesters.
However, a spokesman for Prime Minister Tony Blair reiterated the government would not back down on fuel tax.
He said: “We have acknowledged repeatedly that the price of petrol is high and this causes particular problems, for example, for people in rural communities.
“We have done what we can, but to do more would be to start to jeopardise the extra investment the government is putting into public services.”
Fuel tax activists have warned they will take action again next year if the government does not meet their demands.

The rallies in London and Edinburgh were the culmination of a two-month campaign to force government to reduce fuel prices.
In September a lorry drivers’ blockade of petrol refineries had disrupted deliveries and caused a nationwide shortage of fuel.
“Go-slows” with hundreds of lorries travelling at low speeds along major roads also caused major disruption.
The action was part of a European-wide protest which was spurred on by the success of French truckers in gaining big concessions on fuel taxes from their government.