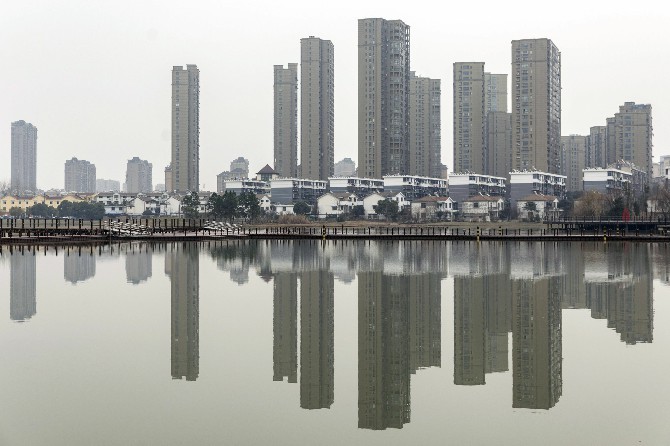 China pledged to step up measures to shore up its troubled banks and small businesses while continuing a crackdown on shadow banking and property speculation, in a difficult balancing act that risks exacerbating a build up in bad debt at its traditional lenders.
As concerns mount over the state of China’s $45 trillion financial system, the nation’s central bank and its top financial regulator used the year’s first weekend to unveil fresh details on how to combat risks amid the slowest economic expansion in three decades.
The People’s Bank of China, which has been reluctant to prime the stimulus pumps too much, said that it would “resolutely win the battle” against increasing financial risks, underscoring its role as a lender of last resort while directing local governments to step up front-line support.
That followed a statement from the China Banking and Insurance Regulatory Commission outlining a series of measures including carving out bad loans, setting up a resolution fund, as well as promoting mergers, capital injections and the restructuring of high risk institutions.
“Risk control has always been on the agenda of the authority, but compared with the previous general guidelines regulators have used strong wording in laying out very specific, drastic measures,” said Zhao Jian, head of the Atlantis Financial Research Institute in Beijing. “That’s a signal policy makers are beefing up efforts to contain financial risks this year.”
With the economy also weighed down by a trade dispute with the U.S., Chinese authorities are taking a more coordinated approach to tackling the problems at the more than 3,000 regional and rural lenders, many of which are struggling with a pileup of soured loans, eroding capital and poor internal controls.
Confidence in these institutions has waned since May, when regulators seized control of a lender in Inner Mongolia – the first such move in two decades – and imposed losses on some creditors. Authorities have since orchestrated bailouts of two other banks and intervened to quell at least two bank runs by jittery depositors.
The CBIRC yesterday approved the rescue plan of one of those lenders, Hengfeng Bank Co. The Shandong-based bank is raising 100 billion yuan ($14 billion) in new equity from investors including Central Huijin Investment Ltd., a unit of China’s sovereign wealth fund.
The regulator over weekend also said it will continue to press on with its two-year campaign against shadowing banking by reducing financial institutions’ non-compliant investments in non-standard assets, which are mostly loans disguised as investments. Insurers should clean up investments that can flow through several products and leveraged transactions between related parties, it said.
It said it would improve risk management in areas such as real estate by preventing speculative housing deals and blocking illegal flows of funds into properties. The central bank, meanwhile, announced it would build a long-term regulatory mechanism to more closely monitor financing to the sector.
China financial market faces a pivotal year as it opens to full foreign ownership. The regulator, which reiterated its commitment to overseeing the opening, is in part counting on the sharpened competition to instill more discipline in its domestic firms. Starting with its futures and insurance markets this month, the nation is enacting the most sweeping changes in decades to allow the likes of JPMorgan Chase & Co., Goldman Sachs Group Inc. and BlackRock Inc. to expand their footprint in China.
The CBIRC also encouraged the conversion of household savings to more long-term capital investments and a greater development of corporate annuity and endowment insurance businesses. The regulator wants wealth management, insurance and trust products to be directly involved in financing and cultivating long-term investments. Bloomberg