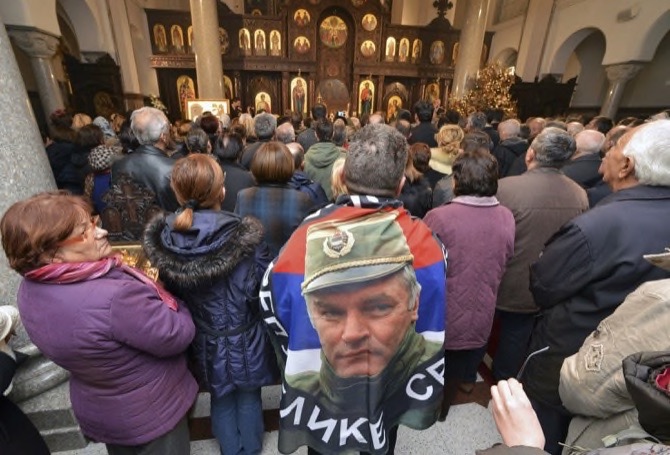 A man wrapped in a Serb flag adorned with a photo of former Bosnian Serb military leader Ratko Mladic, pray in a church as part of ceremonies to celebrate a banned Serb holiday

Bosnian Serbs celebrated a banned “statehood” holiday Tuesday in stubborn defiance of the west and their non-Serb compatriots, but with tacit backing from Russia.

A handful of international guests attended the celebration in Banja Luka, the largest city in the Serb-run part of Bosnia, Republika Srpska. They included Serbia’s interior and defense ministers, as well as Anatoly Bibilov, president of Georgia’s breakaway province of South Ossetia.

The January 9 holiday commemorates the date in 1992 when Bosnian Serbs declared the creation of an exclusively Serb state in multi-ethnic Bosnia. Backed by Serbian strongman Slobodan Milosevic, the act ignited the country’s fratricidal 1992-95 war.

After the war, which claimed 100,000 lives and left 2.2 million people displaced, Republika Srpska became a semi- autonomous region of Bosnia. Non-Serbs who returned to their homes there view the holiday as a celebration of the expulsions and violence they suffered.

Addressing several thousand people who lined the street cheering Tuesday’s parade, Dodik said Serbs had “two states” – Republika Srpska and Serbia – which would always support each other and “wish to become one.”

Dodik, who has repeatedly stated that the Serbs’ long-term goal is secession from the rest of Bosnia, often boasts of Russia’s support for his hard-line policies and efforts to keep Bosnia from establishing closer ties with the West.

Bosnia’s constitutional court banned the Serb statehood holiday in 2015, but Bosnian Serbs have refused to accept the ruling. Their defiance led the United States to impose sanctions on Dodik last year, while European diplomats and EU representatives in Bosnia have stopped meeting with him.

However, Dodik insisted Tuesday that he has many international friends and backers.

“We have many friends and we are proud of them..We have friends in Russia and China,” he said, going on to list Austria’s right-wing Vice Chancellor Heinz-Christian Strache as “a great friend.”

Over the past few years, Dodik has met with Russian President Vladimir Putin at least five times. Many fear the apparent Russian support for his destabilizing policies is part of Moscow’s effort to strengthen its foothold in Europe and could have devastating impacts on the conflict-prone Balkans region.

Membership in the military alliance is a goal supported by the Muslim Bosniaks and Croats who account for over 65 percent of the country’s population. AP