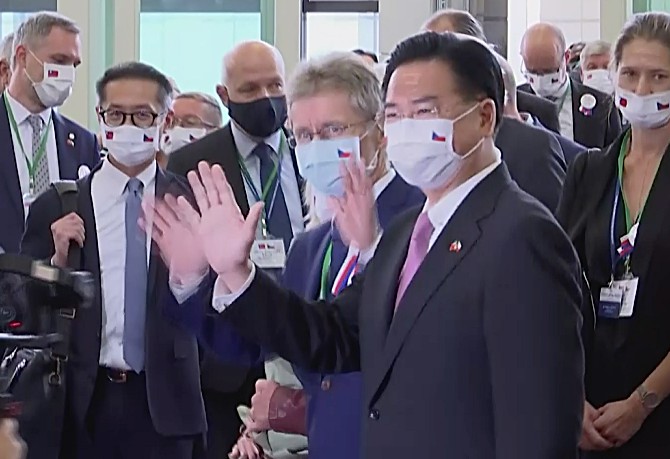 The president of the Czech Senate arrived in Taiwan yesterday on a visit that has drawn sharp criticism from China.
Milos Vystrcil was accompanied by Prague Mayor Zdenek Hrib and more than 80 representatives from government, business and academia, lending Taiwan a boost in its efforts to resist the diplomatic isolation imposed by Beijing.
Taiwanese Foreign Minister Joseph Wu greeted the delegation at Taiwan’s main Taoyuan International Airport after their arrival on a flight chartered from Taiwanese flag carrier China Airlines.
China last week denounced Vystrcil’s visit as “undermining the political foundation of China-Czech relations” and said participants were acting out of “their own interests.”
“China condemns this despicable act and urges the Czech side to abide by the one-China principle and handle Taiwan-related issues in a prudent and appropriate manner,” foreign ministry spokesperson Zhao Lijian told reporters last week.
China claims Taiwan as its own territory and its increasing diplomatic pressure has reduced the number of the self-governing island’s formal allies to just 15, most of them small countries in the Pacific, Central America and the Caribbean.
Taiwan’s democracy and strong defense of civil liberties mark a stark contrast to China’s one-party authoritarian political system, making it a draw for some European politicians who recall Soviet dominance of Eastern Europe during the Cold War.
Vystrcil’s six-day visit follows complaints from the Czech side that China was introducing unwanted political elements into their relations, part and parcel of China’s more aggressive foreign policy under Communist Party leader Xi Jinping that is centered on asserting the country’s territorial claims and shielding the regime from criticism.
Prague and Beijing severed sister city relations after China refused to remove language from the agreement dictating that the city’s government endorse the “one-China principle” that defines Taiwan as part of China.
Shanghai then also ended its sister city relationship with Prague, and China reportedly threatened to cut all such ties to cities that maintained their relations with Prague.
During his visit, Vystrcil is due to meet with Taiwanese President Tsai Ing-wen, who is detested by Beijing for her assertions of the island’s independence.
Vystrcil’s predecessor, Jaroslav Kubera, had planned to travel to Taiwan, angering pro-China Czech President Milos Zeman.
Kubera died in January before making the trip and Vystrcil said China’s pressure, including a warning from the Chinese Embassy against congratulating Tsai on her reelection, contributed to his decision to travel to the island.
Taiwan’s high-tech companies are also major investors in the Czech Republic, somewhat reducing China’s economic leverage over the country. AP