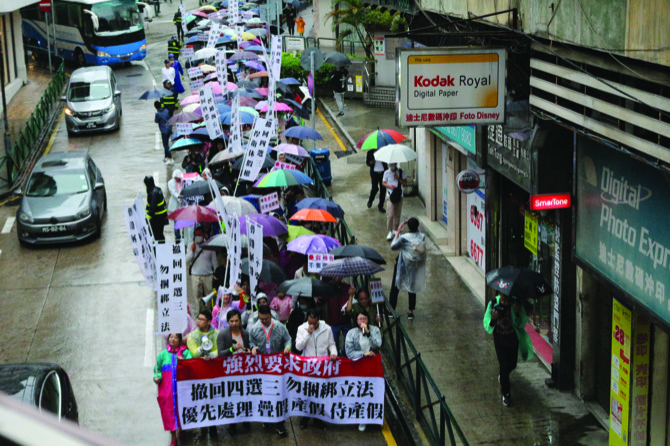 Some 300 residents participated in a demonstration yesterday calling on the government to withdraw the controversial “three in four” proposal.

Demonstrators, despite the rain, gathered at Vasco da Gama Garden to kick off the protest, along with lawmakers Ella Lei and Leong Sun Iok, who strongly opposed the government’s proposal.

The proposal was presented this month at the Standing Committee for the Coordination of Social Affairs (CPCS).

This proposal suggests these three days could be taken on other public holidays and further suggests they be normal working days. The change means that some workers work on these days.

Organizers of the protest, whose group name translates to “Wage Earners Consortium,” fear that the city’s ten mandatory public holidays would simply decrease, noting that there has been no increase in these holidays in the past three decades.

One of the organizers, Max Sun criticized the proposal, describing the move as “unfair,” to local employees.

“We are fighting against these [proposed] holiday laws because it will [seem as if] on a holiday, we work yet will not have extra pay,” said Sun.

“This law is like a bundle,” he added, noting that it is a way to delay the progress of legislation for rest days, mandatory holidays and paternity leave.

“So, if this law comes to pass, the 10 mandatory holidays that we have will be reduced. This is unfair to all employees in Macau,” Sun adds.

The group expected some 1,000 participants to attend the protest, however, due to the rain in the afternoon, it lowered its expectations to 200 or 300.

Following the demonstration, the group handed a letter to the government headquarters, hoping to receive a reply.

According to Sun, the group is ready to take further action to call on the government to withdraw any such proposal.

“We have to see first what the government would do. If they don’t reply, we plan to make another move but it all depends on the government’s reply,” Sun said.

The group is also set to meet with the Labor Affairs Bureau this week.

Figures released by the police authority show that some 340 people participated in the parade, and 50 officers were deployed to maintain order.

THE LABOR Affairs Bureau reaffirmed that the amendment related to the change of three compulsory holidays to non-compulsory ones will not affect employee rights. The bureau explained that once the change is passed by the Legislative Assembly (AL), when employers ask employees to work on these three days, employers will still have to compensate their employees according to the compulsory holiday regulation, which means the change will not reduce employee rights. On December 5, the Standing Committee for the Coordination of Social Affairs will organize a meeting to be attended by both the employer and employee sectors. The government hopes to balance both sectors’ rights.