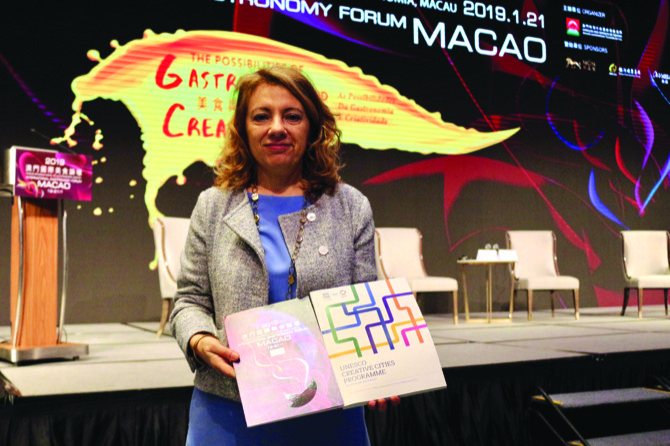 Senior program specialist of Cultural Policies and Development of Culture Sector for UNESCO, Denise Bax, told the Times that the SAR’s efforts in gathering these creative cities play a significant role in the UNESCO Creative Cities Network.

Speaking to the Times on the sidelines of the opening ceremony of the forum, Bax said that the event serves as an example that members of the UNESCO network are boosting efforts in promoting sustainable development – particularly in gastronomy.

Macau Daily Times (MDT) – With your observations on Macau’s culture and gastronomy, how can Macau further advance its role to make significant contributions to the network?

Denise Bax (DB) – Now I fully understand what the city of Macau is. We received Macau’s applications [to be part of the UNESCO Creative Cities Network] and so we only had the application form before, but now with my visit here in Macau, I can see the potential of this UNESCO creative city and its assets.

Macau is a very interesting place because it has a combination of different cultures and so there is a collaboration of different dishes and cuisine. In organizing this international forum, I think Macau has given a signal for the future in terms of our way of working. This is what UNESCO is working on, together with the other designated creative cities, to be able to share their ideas and good practices to be able to achieve the 2030 agenda.

MDT – The network is currently made up of 180 creative cities in different fields, where does Macau place in this and how can it differ from the offerings of the other cities?
DB – Each city is different depending on the country and its size and each has their own assets. This is why it [is important to] follow a procedure and have evaluations until the time the city is designated. We evaluate each component of the city. Macau was designated in 2017 and submitted a very interesting proposal. […] It is important how the city is contributing to the UNESCO network and how they are helping achieve the sustainable development goals.

MDT – So in line with the sustainable development goals of UNESCO, is Macau on par?

DB – Yes, Macau is also closely working with all the cities. For example, it is specifically working on the Sustainable Development Goal 11.4, which specifically pledges to make cities and human settlements inclusive, safe, resilient and sustainable. Macau perfectly understood the goals and reasons why it’s important to continue to pursue cooperation between cities, not only in the field of gastronomy but with the [seven creative fields] that include Craft and Folk Art, Design, Film, Literature, Media, Arts and Music. I think this is also why Macau is so fascinating, because while having the opportunity to taste the city’s flavors, at the same it [features] music, films and videos, and I think that is interesting.

MDT – Can we confidently say that Macau plays a significant role in reaching the UN’s goal by 2030?

MDT – This forum is a celebration of diverse gastronomic culture, such as the event that was held over the weekend. How can these events further such as food enthusiasts from outside the city to promote local food?

DB – These kinds of events are for tourists, but it is also […] a way for local people to be proud of its culture and to be able to have an exchange and demonstrate [local cuisines] with people from around the world.

I have had discussions with different people this morning and many of them say that it is fascinating that the city has some common dishes with other countries.

So, these kinds of experiences held in one place and being offered to visitors from other countries is really the art of this program.

MDT – Any recommendations or proposals that you could give on how we could use our place in the network to bring out the best gastronomic experience for tourists and local residents?

DB – I think Macau is really  involved in this network and I think that organizing and participating in events likes these are really important for the network. There are a lot of preparations and documentations that are needed to be able to hold these kinds of events but it is important to nurture the network.