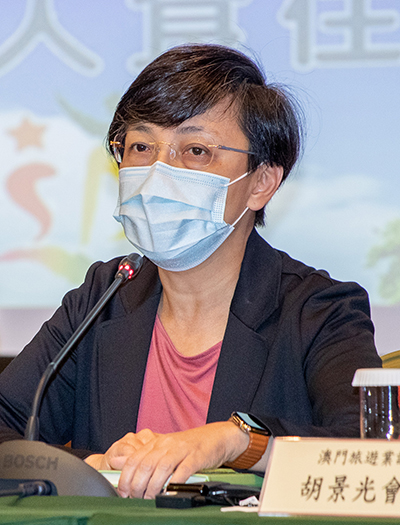 The fund in the revised Consumption Benefit Scheme can be used to purchase tourism products of the “Stay, Dine and See Macao” domestic travel scheme, the director of the Macao Government Tourism Office (MGTO) Maria Helena de Senna Fernandes confirmed yesterday.
Both programs are part of the government’s third round of economic stimulus, and are aimed at creating job opportunities and encouraging locals to stimulate the local economy through spending.
The domestic travel scheme will run from April 15 to the end of December. However, locals will not be allowed to redeem their e-vouchers before June.
When asked by media whether the inconsistent roll-out time would have any negative impact on the efficiency of the domestic travel scheme, Fernandes said she believed that some travellers may wait, but “some would be eager to enjoy discounted offerings [before the launching of e-voucher scheme.]”
She is sanguine about the prospect of the travel scheme because the data from the previous version titled “Macao Ready Go! Local Tours” revealed that locals were willing to join more than two packages even without the provision of subsidy.
In the last scheme, every resident was entitled to two subsidies, each at MOP280, amounting to a total of MOP560 for tour participation.
According to the official data, the “Macao Ready Go! Local Tours” project injected over MOP56 million into the local economy. Almost 140,000 participants joined over 4,300 tours.
The details of the revised Consumption Benefit Scheme were unveiled on April 12. Under the scheme each permanent and non-permanent resident ID holder in Macau will be granted a start-up fund of MOP5,000 and a discount grant of MOP3,000 through a mobile payment platform or previous electronic consumption card. The redemption period will be June to December this year.