Diplomacy | Beijing accuses US of inciting Lithuania over Taiwan 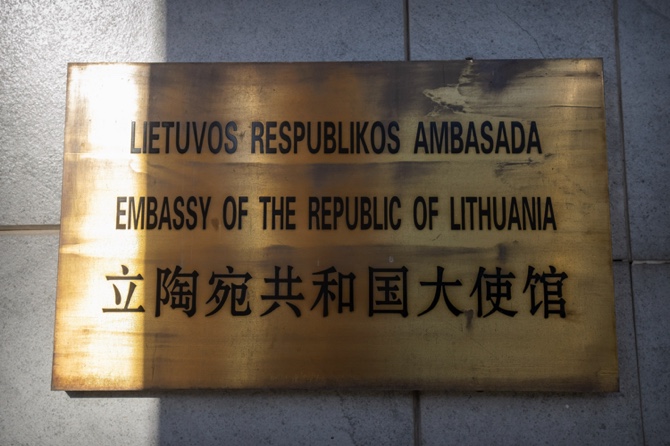 Beijing yesterday accused Washington of inciting Lithuania to “contain China” in a feud over the status of self-ruled Taiwan after U.S. officials expressed support for the European Union-member country in the face of Chinese economic pressure.

Lithuania is the latest flashpoint in China’s campaign to pressure companies and foreign governments to adopt its positions on Taiwan, Tibet and other sensitive issues.

“The United States has instigated the Lithuanian authorities to undermine the ‘one-China principle’,” said a foreign ministry spokesman, Wang Wenbin. “It has supported, aided and abetted them in going further down the wrong path to achieve its political calculations to contain China.”

American and Lithuanian officials say China has blocked imports from the northern European country since the Taiwanese government was allowed to open a trade office there under the name Taiwan.

In a phone call last week, U.S. Trade Representative Katherine Tai expressed “strong support” to a European official for Lithuania “in the face of economic coercion,” Tai’s office said in on its website.

Taiwan and China have been ruled separately since splitting amid civil war in 1949. The mainland’s ruling Communist Party never has controlled the island but claims it as part of Chinese territory and threatens to invade.

The U.S. and most other governments, including Lithuania, have diplomatic relations only with Beijing but maintain commercial and informal political ties with Taiwan’s democratically elected government. Most governments acquiesce to Chinese pressure by requiring Taiwanese entities to operate under the name Chinese Taipei.

Beijing retaliated for Lithuania’s move by expelling the Lithuanian ambassador. Lithuania has closed its embassy in Beijing. MDT/AP