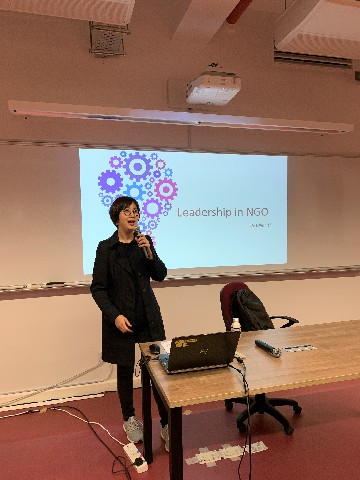 Disadvantaged groups do not have to be associated with misery, emphasized Lillian Li, Chief Executive of Direction Association for the Handicapped in Hong Kong.
The non-governmental organization leader added that the crucial part of her work is to consult with the government, or policymakers, to make life more convenient for the disadvantaged groups.
Before joining the Direction Association, Li co-founded two organizations: Silence Ltd. and SEN Rights. The former was formed after the passing of her younger sister.
“My sister was hearing impaired,” said Li. “She managed to finish university education but couldn’t find a job for months.”
Although her sister managed to eventually find a job at a secondary school teaching Accounting and Commerce, she could not stand the massive stress and committed suicide. This tragedy prompted Li to start Silence Ltd.
When she was still working there the organization focused on the provision of family support as this was absent at the time in Hong Kong.
She also worked hard to promote the knowledge of sign language. Li was behind the initiation of juxtaposed sign language interpretation on newscasts. “Even though it was only on the English channel, it was started anyway,” recalled Li.
Silence Ltd. also worked extensively on career development for the hearing impaired, “because this is the reason why I started the organization,” Li said.
After working for some time at Silence Ltd., Li moved on to start another organization: SEN Rights. It focuses on children with special educational needs (SEN). SEN students face difficulties in learning in the same environment and manner as mainstream students.
At that time, the issue was not appropriately addressed and support for such students was not sufficient in Hong Kong. Along with a team of passionate individuals, Li flew to Taiwan to acquire knowledge about SEN and related work.
Besides advocating at government level, SEN Rights also managed to invite distinguished scholars within the discipline to speak and lecture in Hong Kong.
Following these two successes, Li heard about the Direction Association, and she was invited by the then-president to become chief of the organization during its rebranding.
Of course, Li asked herself if she should consider the offer.
She ultimately opted to leave the organization she started and accepted the challenge because she believed, and still believes, that the founder of an organization should step down at some point. “The founder’s existence is symbolic initially, but later it may slow down the development of the organization,” she said.
However, there was a prominent challenge ahead of her. “Parachuting onto a managerial position can be very tough,” Li said. Before the Direction Association, she parachuted into a different organization, an experience she found difficult because she expected people would simply see her as a new boss.
“Initially I played it straightforward. Some of the colleagues weren’t happy, and my blend-in wasn’t smooth,” she recalled. “I distributed tasks to colleagues and draw a full stop when the tasks were finished. I seldom listened to their hearts.”
She has learned the lesson and started mildly at the Direction Association. However, despite this, colleagues panicked after she came onboard, although they had conducted a “background check” on her beforehand.
She gradually gained trust from her colleagues; the then director-general opened up to her about the problems faced by the Association.
In order to boost the Association’s standing, Li’s first major overhaul was with the organization’s image. She changed the logo, based on a calligraphic work of the Association’s name written by Hong Kong star entertainer Andy Lau.
She also worked on de-stigmatization of her service users, in such a way that the disabled group was not associated with negative emotions, such as misery.
Her suggestion to managers is that they should be able to admit their own shortcomings and open the door to the able to accept help.