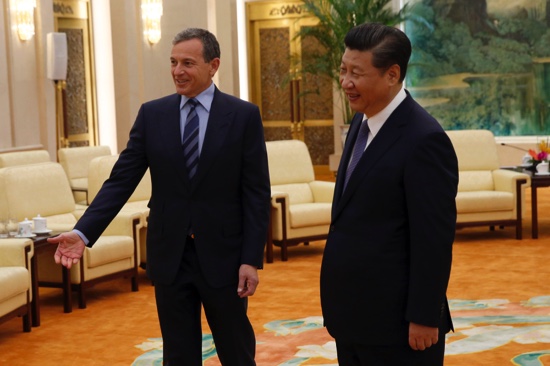 The head of entertainment giant Disney had a rare official meeting with Chinese President Xi Jinping yesterday, a month before the opening of its USD5.5 billion theme park in the country’s financial hub of Shanghai.
Xi told Disney CEO and Chairman Robert A. Iger that it was important for the world’s “strongest” country, referring to the U.S., and the world’s largest developing country to deepen their cooperation and expand it into new areas.
Cooperation between “U.S. firms with Chinese firms, and in particular the Walt Disney Company with Chinese firms, are exactly cases in point of such new cooperation,” Xi said. “And I believe the new cooperation will continue to yield new outcomes.”
One such partnership for Disney seemingly ran into trouble recently when a service launched in December with e-commerce giant Alibaba was taken offline. DisneyLife allowed subscribers in China to access Disney-branded movies, games and e-books, and helped them to plan trips to Disney’s Hong Kong and upcoming Shanghai theme parks.
The service stoppage comes amid a broader crackdown on digital media in tandem with an increasingly restrictive political climate in China. In February, a new requirement stated that foreign companies and foreign-Chinese joint ventures must obtain approval before publishing content online.
Apple Inc.’s movies and e-books services also have been suspended in China, though the company said it is optimistic they will be back online.
Disney said it licenses content to Alibaba, and could not comment on DisneyLife’s suspension. Alibaba said in a statement: “The service is undergoing an upgrade. We do not have an estimate on when the service will resume.”
At the Great Hall of the People, the ceremonial seat of China’s legislature, Xi congratulated Iger on the planned opening on June 16 of the Shanghai Disney Resort, the company’s first theme park in mainland China.
It is relatively rare for China’s president to meet publicly with private business leaders, but the park is a prestige project for China, reflecting the government’s push to stimulate growth by boosting consumption and services.
Iger said, “What The Walt Disney Company has been able to achieve in China, I think, is a perfect example of cooperation, but it also came after years of understanding, years of building up a deep respect for one another and appreciation for each other’s interests.”
Iger arrived in China as a Chinese-made animal movie has found itself at the center of charges it has copied the name and marketing material of Disney’s latest global animation hit, “Zootopia.” The film translates as “Crazy Toy City,” compared to Zootopia’s Chinese name “Crazy Animal City,” and social media users have charged that posters for both movies look strikingly similar.
Disney didn’t immediately respond to a query for comment on that. 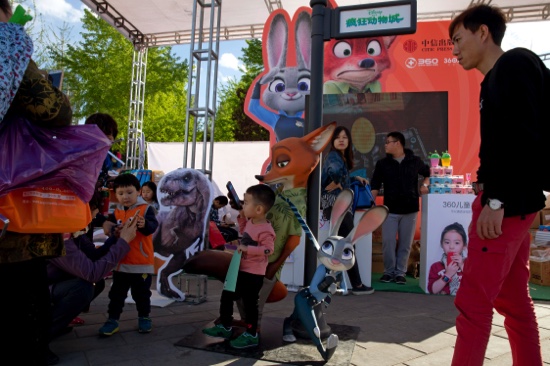