Walt Disney Co. employees and guests received a sneak preview of Shanghai Disneyland over the weekend, as the world’s largest entertainment company gets set for next month’s official opening of its first theme park in mainland China.
A trial run for the USD5.5 billion Shanghai Disney kicked off on Saturday. Guests are limited to the resort’s employees, partners and stakeholders, who can try out some attractions, entertainment and dining on selected dates over a six-week period.
Lines had formed by 10 a.m. outside shops and restaurants in the non-ticketed area, where the World Disney store opened to the public. Wang Xingmiao, a retiree who has never traveled outside of China, is among thousands who came to the site even though he wasn’t on the guest list.
“It opens the eyes of old people and young people to see something like this,” the 78-year-old said outside the World Disney store. “It shows the importance of China that something like this comes to us and we don’t have to go out to see it.” 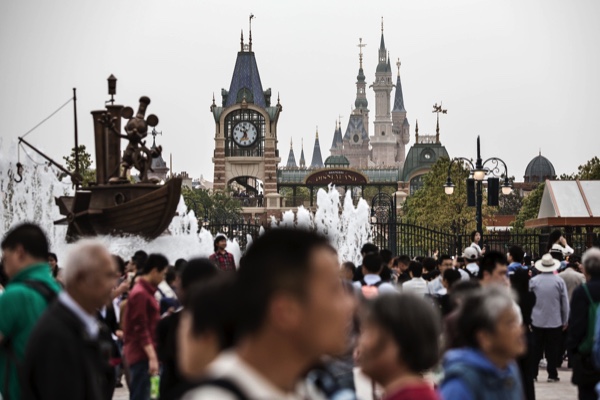 Such trials are a key pre-opening step for all Walt Disney Parks and Resorts destinations and major attractions around the world. The Chinese resort, located in Shanghai’s Pudong district, officially opens June 16.
The highly anticipated Chinese park, Disney’s sixth worldwide, comes as the company shocked investors on April 4 when it announced Chief Executive Officer Robert Iger’s top lieutenant Thomas Staggs was departing the company in September, leaving the CEO without an obvious successor. A 26-year-company veteran, Staggs had supervised major expansions such as the Shanghai resort and spearheaded acquisitions for the Burbank, California-
based company.
Iger met with Chinese President Xi Jinping on Thursday in Beijing, in which Xi cited Disney as an example of expanded cooperation between U.S. and Chinese firms.
“What the Walt Disney Company has been able to achieve in China, I think, is a perfect example of cooperation, but it also came after years of understanding, years of building up a deep respect for one another and appreciation for each other’s interests,” Iger said in remarks to Xi at the meeting.
The CEO has called Shanghai Disneyland the company’s greatest opportunity since Walt Disney bought land in Florida in the 1960s. He’s counting on 330 million Chinese living within a three-hour train or car trip of Shanghai to fill the resort, which boasts two hotels and the largest castle it has built.
Tickets for the Shanghai park, three times the size of Hong Kong Disneyland, are priced at 499 yuan ($77) for peak periods such as weekends and summer holidays, and 370 yuan at other times.
Disney is planning a three-day event to mark the opening of its newest park next month, which will include a red carpet premiere of its Lion King Broadway show, the first time the production will be performed in Mandarin. The company has been on a recruiting drive to staff up the park, which Iger said last year would employ about 10,000 workers.