Dreams to compete at Tokyo Paralympics shattered for Macau athletes 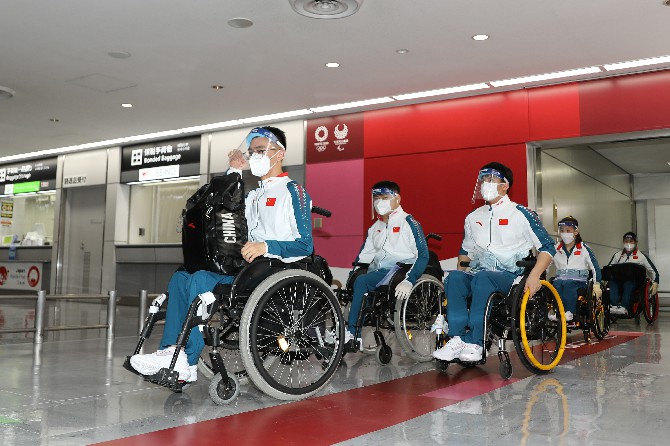 Members of Chinese Paralympic delegation arrive at the Narita airport for the Tokyo Paralympic Games in Tokyo, Japan

The Paralympics is the only Olympic-level competition in which Macau has the right to compete, but this year, the city’s residents will not see its athletes at the mega-event.
Due to its history, Macau, unlike Hong Kong, cannot send a team to compete in the Olympics, but this does not extend to the Paralympics, as the city has fielded a team at several previous games.
However, many local athletes have lost the chance to qualify for the Tokyo Paralympics due to tightened immigration and quarantine measures which barred them from participating in overseas competitions to obtain necessary points and rankings for qualifications.
A swimmer, who has obtained a wild card from the Organizing Committee of the Tokyo Paralympics, will not be able to chase his dream and represent Macau’s sporting spirit on a global stage, because the Macau-China Paralympic Committee & Macau-–China Recreation and Sports Association for the Disabled (MPC) declined the wildcard offer.
Not surprisingly, the MPC defended the decision by describing the pandemic condition as unstable. “[The decline] was on the grounds of safety,” the MPC explained. It also cited that more than 200 individuals linked to the Tokyo Olympics have been diagnosed with Covid-19.
According to the World Economic Forum, there were 11,500 athletes competing at the Tokyo megaevent, while 79,000 other individuals, such as journalists, officials and supporting staff, undertook various roles at the Olympics.
It means that about 0.22% of these individuals who attended the event have been diagnosed with Covid-19.
The MPC added that the decision to not send anyone was made after discussion with families of athletes.
The 2020 Tokyo Paralympic Games is scheduled from today to September 5.
Hong Kong delegation has 64 members, including 24 athletes for eight events, half of whom are debutants.
China, meanwhile, has 132 female and 119 male participants that will compete in 20 of the 22 sports on the Tokyo 2020 program, including first-time Paralympic events of taekwondo and badminton, representing a record for the most sports China has competed in at an overseas Paralympic Games. AL