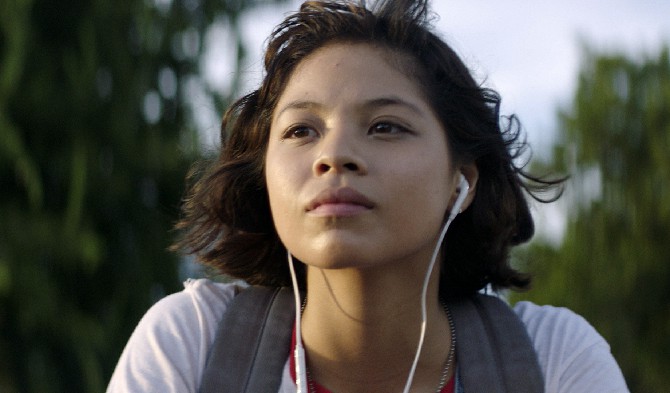 Eva Noblezada in a scene from “Yellow Rose”

I’m illegal,” says Rosario “Rose” Garcia (Eva Noblezada), a Filipina living undocumented in Texas, in Diane Paragas’ “Yellow Rose.” The way she says it is meant, as it is, to sound ridiculous. Here is a bright, headstrong young woman, dressed in jeans and a cowboy hat. She’s about the furthest thing possible from a criminal. She’s a picture of Americana.
Unrequited love has taken many forms in the movies, but in “Yellow Rose,” devotion is denied by a country. Rose, 17, lives with her widowed mother, Priscilla (Princess Punzalan), at the motel where she works as a cleaner. On the night when Rose and a guitar-shop friend Elliot (Liam Booth) sneak into Austin to see Dale Watson (playing himself) perform at the Broken Spoke dance hall, Priscilla is taken by Immigration and Customs Enforcement, imprisoned and soon deported to Manila. Rose narrowly escapes the ICE raid, and is left distraught and alone. She improvises a life of her own in Texas, a plight coinciding with her awakening as a country musician.
The contrasts of “Yellow Rose” are stark. It’s part a “Star Is Born”-styled coming-of-age tale, part immigrant nightmare. That makes for an often moving, sometimes clunky take on the modern American musical, where an aspiring, hugely talented singer making her way through boozy bars needs sanctuary as much as she does a big break. The script can be too heightened and prone to leaps of coincidence, and details are sometimes lacking. But the heart of “Yellow Rose” is true, a testament to Noblezada’s strong presence and her ability to belt the film’s original songs.
It’s the first film for Noblezada, the Tony-nominated star of the recent Broadway revival of “Miss Saigon,” and a cast member of “Hadestown.” (In a poignant bit of casting, the originator of Kim in “Miss Saigon,” Lea Salonga, co-stars as Rose’s aunt.) She makes the transition seamlessly; Noblezada’s performance is intense and fiery. She’s best when opposite Watson (who becomes her mentor) and the Broken Spoke owner Jolene (Libby Villari), who both bring a welcome naturalism to the film.
“Yellow Rose” occasionally touches on the daily terror of other undocumented immigrants — ICE is always just around the corner. (One agent, perhaps unrealistically, lets Rose go during a raid on the Broken Spoke.) But considering the film’s proximity to the Mexican border, it could have enlarged its scope to incorporate Hispanic characters more than a brief encounter with a swiftly captured fellow kitchen worker. Still, “Yellow Rose” sings an affecting, sorrowful and defiant song where dreams collide with a cruel reality. JAKE COYLE, AP Film Writer

“Yellow Rose,” a Sony Pictures release, is rated PG-13 by the Motion Picture Association of America for some strong language, and teen drinking. Running time:
94 minutes.