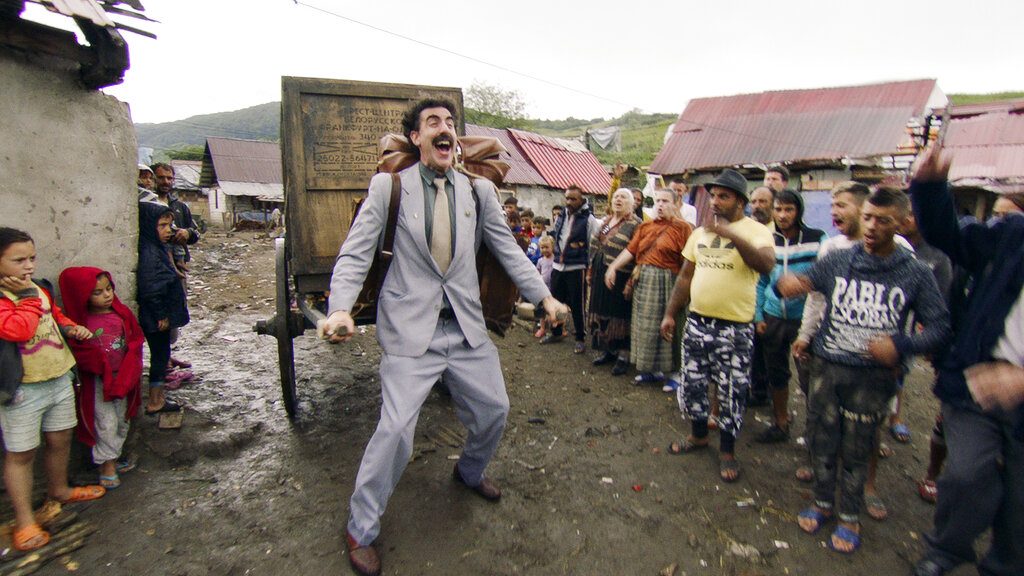 Since Sacha Baron Cohen first appeared as his Kazakh journalist on “Da Ali G Show,” Borat Sagdiyev has been remarkably consistent. The accent is the same. The gray suit is still rumpled. “Nahce” and “Mah Wahfe” regularly exude from him with a mangled melody. Borat hasn’t changed in the last 20 years. But America has.

When Baron Cohen last traipsed across the country as Borat, in 2006’s “Borat: Cultural Learnings of America for Make Benefit Glorious Nation of Kazakhstan,” his character’s unapologetic anti-Semitism, misogyny and racism teased prejudices out from all kinds of dark and not-so-dark corners. His comedy revealed a more disturbing, hidden America that was often happy to go along with Baron Cohen’s gonzo act. Fourteen years later, those prejudices aren’t so hard to find. Borat fits right in.

In “Borat Subsequent Moviefilm: Delivery of Prodigious Bribe to American Regime for Make Benefit Once Glorious Nation of Kazakhstan” — Baron Cohen’s October surprise, shot secretly earlier this year and debuting Friday on Amazon Prime Video — Borat returns to the U.S., like a deranged Alexis de Tocqueville, for another look.

It takes a little while to get going. Borat doesn’t have the free rein he once did, and not just because of the restrictions of the pandemic. He’s hounded on the streets by cell phone-waving fans asking for a picture, and has to resort to a coterie of disguises. His trail of fiascos this time is a little more limited but no less damning. The “Borat” sequel will make you laugh and squirm as much as it will send shudders down your spine.

Jason Woliner, a TV veteran and frequent collaborator with Aziz Ansari taking over as director for Larry Charles, begins by catching us up on Borat. Locked away in the gulag for bringing shame on Kazakhstan with the first movie, Borat is temporarily freed for a mission to deliver a gift to Trump (Borat refers to him, admiringly, as “McDonald Trump”). Given his past encounters with the president (Baron Cohen’s Ali G interviewed him; Borat previously defecated in front of a Trump building), it’s judged best to instead seek out who Borat calls “America’s most famous ladies man,” Vice President Mike Pence.

Borat arrives via shipping container in Galveston, Texas, only to find that the monkey meant for Pence is dead and his daughter Tutor (played by Bulgarian actress Maria Bakalova), last seen chained alongside farm animals, has stowed away. They’ll remain paired throughout the film in a journey through America and Borat’s own over-the-top sexism. This “Borat” is, in its own absurd way, a #MeToo movie.

There are stopovers with an Instagram influencer for a lesson on sugar-baby submissiveness, a debutant coach, a plastic surgeon and an anti-abortion clinic where a pastor maintains his stance despite being given the impression Tutor has been impregnated by her father. “God doesn’t make accidents,” he says.

Borat, however, does, and in the film’s second half, he launches his most audacious stunts. They include a trip, with Borat dressed as Trump, to the Conservative Political Action Conference, where he shouts at Pence from the crowd before being rapidly removed; and a “March for Our Rights Rally” in which he leads a crowd of Trump supporters in a sing-along not unlike Borat’s famed “Throw the Jew Down the Well” ditty. This time, mentions of Barack Obama and Anthony Fauci are followed by choruses of “Inject him with the Wuhan flu” and “Gas him up like the Germans.” The film’s piece-de-resistance is an exceedingly awkward sit-down interview with Rudy Giuliani and Tutor that ends with Borat (disguised as the boom-mic holder) rushing in on the two of them in a charged moment alongside a hotel bed.

Borat’s adventures are often followed by a raft of lawsuits, and that could well be the case again. Some have already been filed. But I suspect there won’t be a lot of apologies or public contrition this time around. There isn’t anything that Borat uncovers that can’t be found on the airwaves, in social-media posts and across newspaper front pages. In the movie’s most compelling section, Borat appeals to a pair of guys for a place to stay, and despite it being a pandemic, they warmly welcome him in. How long Borat stays there isn’t clear but it seems like several days. They’re friendly hosts who happily discuss political views they’ve gleaned partly from the internet, like that Hillary Clinton drinks the blood of children. When Borat shares some of his wild ideas about Jews, they correct him. That’s not true, they say. “That’s a conspiracy theory.”