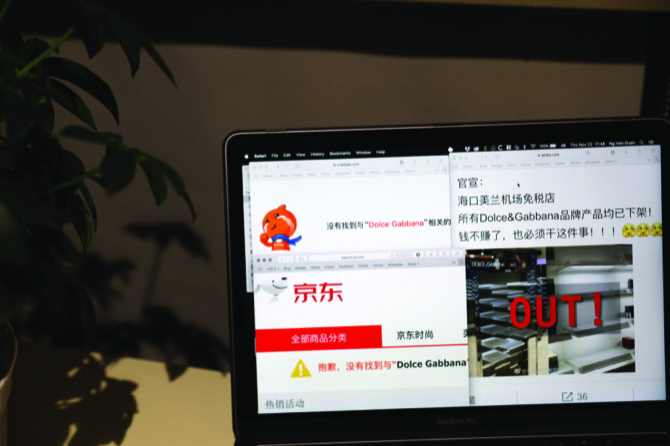 Dolce&Gabbana goods disappeared yesterday from Chinese e-commerce sites as the fallout grew over remarks insulting to China that were apparently made by two of its Instagram accounts. The company has blamed hackers.

Searches for Dolce&Gabbana turned up no items on major online retailers such as Alibaba’s Tmall and JD.com. Both companies didn’t respond to requests for comment.

A duty-free shop at the Haikou Meilan airport on China’s Hainan island posted a photo of empty shelves on its social media account, saying that it had pulled all Dolce&Gabbana products. It wrote in another post that “Even if our power is small, we have to show our stance. We are proud of being Chinese.”

The moves by retailers came one day after several screenshots were circulated online showing co-founder Stefano Gabbana referring to China with crude terms and emoji as he defended promotional videos that had sparked controversy earlier.

The comments were made in a private message exchange with another Instagram user. Separately, the Dolce&Gabbana account used offensive language in another exchange.

The Italian luxury fashion house apologized and said both accounts had been hacked. “We have nothing but respect for China and the people of China,” it wrote.

The apology was too late to save a major extravaganza in Shanghai that Dolce&Gabbana had billed as one of its biggest shows ever outside of Italy.

Major Chinese celebrities threatened to boycott the event, which had been scheduled for Wednesday night, and the company finally called it off. Actress Zhang Ziyi, who starred in “Crouching Tiger, Hidden Dragon,” said that the Italian brand had “disgraced itself.”

An analyst said the bad publicity will have a lasting effect.

“It’s the kiss of death for Dolce&Gabbana,” said Shaun Rein, founder and managing director of China Market Research Group in Shanghai. “I expect them to have a real tough time over the next six to 12 months.”

The three promotional videos that led to the Instagram fiasco showed a Chinese woman using chopsticks to eat pizza and other Italian food. Many in China called them racist and full of outdated stereotypes. The videos were previously deleted from the company’s account on Weibo, a Chinese version of Twitter.

Rein said it’s a big mistake when westerners come up with creative content but don’t understand how the campaigns will be received by Chinese consumers.

He noted a trend of rising nationalism in China. “So if you, as a western brand, do anything that looks like you are mocking or making fun of Chinese culture, that’s a big no-no,” he said.

The ruling Communist Party’s People’s Daily newspaper wrote on Weibo late Wednesday: “China has always been friendly to foreign businesses. But it doesn’t mean there’s no bottom line. There is a deal only when there is respect.” Ken Moritsugu, Beijing, AP