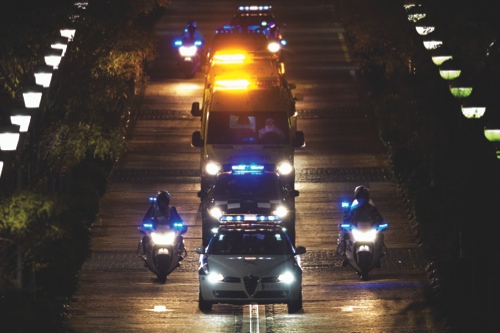 In a case underscoring the perils of caring for Ebola patients, a nurse in Spain has come down with the disease — the first time the virus has spread outside West Africa during the current epidemic.
The nurse’s illness illustrates the danger that health care workers face not only in poorly equipped West African clinics, but also in the more sophisticated medical centers of Europe and the United States, said Dr. William Schaffner, an infectious disease expert at Vanderbilt University.
“At greatest risk in all Ebola outbreaks are health care workers,” he said.
The development came Monday as another American sick with the disease arrived back in the U.S. for treatment and President Barack Obama said the government was considering ordering more careful screening of airline passengers traveling from the outbreak region.
The unprecedented Ebola outbreak this year has killed more than 3,400 people in West Africa, and become an escalating concern to the rest of the world. It has taken an especially devastating toll on health care workers, sickening or killing more than 370 in the hardest-hit countries of Liberia, Guinea and Sierra Leone — places that already were short on doctors and nurses.
The Spanish nurse was part of the medical team that treated a 69-year-old Spanish priest — Manuel Garcia Viejo — who died in a Madrid hospital late last month, Spain’s health minister said Monday.
The sick priest had been flown home from his post in Sierra Leone; the nurse is believed to have contracted the virus from him. She went to a Madrid hospital with a fever on Sunday, 10 days after the priest died, and was placed in isolation. She was transferred early yesterday to Madrid’s Carlos III hospital, where the priest — and a second missionary priest sick with Ebola — were cared for until they died.
The World Health Organization confirmed there has not been a previous transmission outside West Africa in the current outbreak.
In the U.S., video journalist Ashoka Mukpo, who became infected while working in Liberia, arrived at the Nebraska Medical Center in Omaha, where another Ebola patient had been treated. It’s not clear how he was infected. It may have happened when he helped clean a vehicle someone died in, said his father, Dr. Mitchell Levy. On Monday, his symptoms of fever and nausea still appeared mild, Levy said.
“It was really wonderful to see his face,” said Levy, who talked to his son over a video chat system.
Mukpo is the fifth American sick with Ebola brought back from West Africa for medical care. The others were aid workers — three have recovered and one remains hospitalized.
There are no approved drugs for Ebola, so doctors have tried experimental treatments in a few cases.
The critically ill Liberian man hospitalized in Dallas is also getting an experimental treatment, Texas Health Presbyterian Hospital said Monday. Thomas Eric Duncan is the first person to be diagnosed with Ebola in the U.S.; he was admitted to the hospital on Sept. 28, about a week after arriving in Texas. Mike Stobbe, Medical Writer, New York, AP