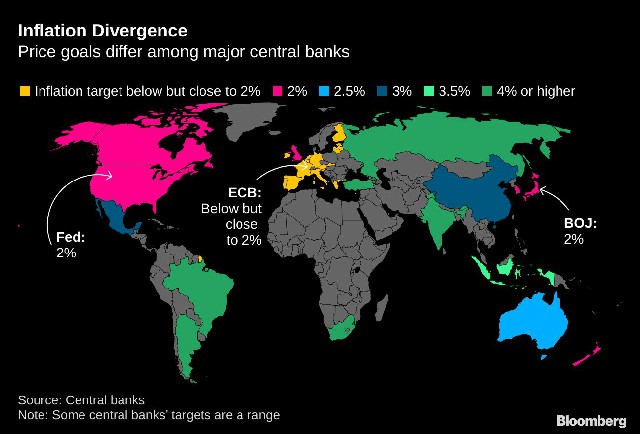 European Central Bank policy makers expect to tweak their inflation target in an upcoming review of their strategy but will struggle to go much further than that, according to officials with knowledge of the matter.
The institution’s first fundamental assessment in 16 years might conclude with a goal of 2% – instead of the current “below, but close to, 2%” which some governors worry risks leaving inflation too weak. A more radical change to measuring and achieving price stability is probably too ambitious, said the people, asking not to be identified because the discussions are private.
Tweaking the inflation goal to 2% over the medium term would have the advantage of removing any pressure to start tightening policy as soon as price growth moves north of 1.5%. Ideally, it would also boost expectations – a critical factor for generating actual inflation – by creating room to overshoot for a while, one person said. An ECB spokesman declined to comment.
The review is also set to evaluate how the ECB can address climate change, a topic of increasing importance for central banks but also a controversial one. New President Christine Lagarde said in a letter to a European Parliament member last week that the study is an opportunity to reflect on sustainability.
Lagarde plans to announce her intentions soon, and ECB Chief Economist Philip Lane said on Wednesday that it’s a “bad idea” to anticipate the outcome. Still, the early speculation by insiders reflects the reality that there’s no consensus in understanding the forces shaping the euro-zone economy, nor what to do about them.
Despite eight years of monetary stimulus with measures including bond purchases and negative interest rates, the previous president, Mario Draghi, was unable to reignite inflation. Price growth has slipped below 1% and forecasts for coming years have repeatedly been cut.
The chief problem, the officials said, is that no one is really sure how inflation – and associated models such as the Phillips Curve, which describes the link with unemployment and wages – works any more. For that reason, the review will build on earlier research into why inflation has stayed so low for so long.
While a common view is that globalization and technology have put downward pressure on prices, an ECB working group found in 2017 that cyclical factors such as global shocks and commodity prices have played a bigger role. That report concluded that ECB stimulus such as quantitative easing helped support inflation expectations.
The topic has long puzzled central banks. The U.S. Federal Reserve, which has a dual mandate to keep prices stable and the economy at maximum employment, and which has set itself an inflation goal of 2%, plans to complete its own strategic review in mid-2020.
One solution advocated publicly by Austrian Governor Robert Holzmann would be to lower the goal, making it easier to hit and so reducing the need for stimulus. That view isn’t accepted at the top of the ECB though, amid concerns that interest rates would stabilize at too low a level to provide a buffer against future downturns.
Likewise, there are divergent views internally over how much flexibility around the target there should be. Typically hawkish governors such as Bundesbank President Jens Weidmann see no obvious need to make a change at all. His Dutch colleague Klaas Knot has proposed a band around the goal.
Lane advocates “symmetry” – suggesting the ECB would give equal weight to boosting weak inflation and countering too-strong price growth and that a range would therefore be inappropriate.
“We care about failing downward as much as failing upward,” he said in Luxembourg on Wednesday.
The topic of what inflation gauge to target looks even thornier. The ECB acknowledges the flaws of the harmonized index produced by the European Union‘s statistics office – which is based on input from the 19 members states and which dramatically underweights housing costs – but there is no clear alternative, the officials said.
While one of the people said they couldn’t rule out the central bank constructing its own measure, another warned that it would be crazy to change the yardstick now, when the ECB hasn’t met its objective.
The evaluation of climate change is a potentially divisive issue, with officials worried that it could muddy the price-stability mandate and compromise the ECB’s independence. Weidmann said last month that “there could be conflicting goals as soon as monetary policy dictates that you need to step on the brake and reduce the purchase of bonds.”
Still, there is pressure to include it. Academics and civil society groups wrote an open letter to Lagarde this week urging her to change tack and purge the bonds of climate polluters from its balance sheet.
Bank of France Governor Francois Villeroy de Galhau said yesterday in Tokyo that he wants the review to focus on three issues: clarification of the symmetrical approach to the inflation target; a “soft coordination” between monetary policy and financial stability tools; and climate change.
The next policy meeting is on Dec. 12, which may be the moment for Lagarde to announce the review. Staff from the ECB and the national central banks aren’t waiting though – they’ve already started work informally on possible options. Paul Gordon & Yuko Takeo, Bloomberg