Ecuador rattled by hundreds of aftershocks, death toll jumps to 272 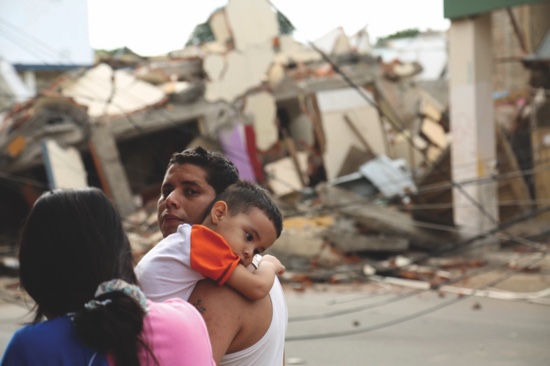 A man holds a child next to a collapsed building caused by a 7.8 earthquake in Portoviejo

New aftershocks are rattling Ecuador — part of the hundreds following a deadly magnitude-7.8 earthquake that has killed at least 272 people in the Andean nation.
The Geophysics Institute says 230 aftershocks had hit as of yesterday morning [Macau time], ranging in magnitude from 3.5 to 6.1 and striking at shallow depths.
The institute also sent out a steady stream of tweets yesterday morning each time a new aftershock was registered. Most were happening in the Pacific Ocean near the hard-hit coastal cities of Pedernales and Manta.
Ecuador’s president, Rafael Correa, has warned the death toll could rise significantly from Sunday’s quake, which also injured more than 2,500 people.
Spain has sent a military plane with 47 search-and-rescue experts and their five dogs to Ecuador to help authorities look for survivors from the earthquake that killed at least 272 people.
The jet left a military base airport outside Madrid yesterday and was expected to arrive in the hard-hit city of Guayaquil today.
The 39 soldiers and eight firefighters were sent after Ecuadorean President Rafael Correa said the death toll was sure to rise much higher amid evidence some people are still alive underneath rubble.
Correa said earlier that rescue teams were also coming in from Mexico and Colombia. He says the 7.8-magnitude earthquake is the worst natural disaster to befall the Andean nation since a 1949 earthquake in Ambato that killed thousands.
After visiting areas hard hit by the quake, Correa gave the new count to reporters yesterday and said it would “surely rise, and in a considerable way.”
The Ecuadorian president said the country will overcome the tragedy.
“The Ecuadorean spirit knows how to move forward, and will know how to overcome these very difficult moments.”
As Ecuador digs out from its strongest earthquake in decades, tales of devastating loss are everywhere amid the rubble.
The 7.8-magnitude earthquake left a trail of ruin along Ecuador’s normally placid Pacific Ocean coast, buckling highways, knocking down an air traffic control tower and flattening homes and buildings.
Portoviejo, a provincial capital of nearly 300,000, was among the hardest hit, with the town’s mayor reporting at least 100 deaths. Among them are 17-year-old Sayira Quinde, her mother, father and toddler brother, crushed when a building collapsed on their car.
A grief stricken aunt, Johana Estupinan, is now heading to the town of Esmeraldas, where she will bury her loved ones and break the news to her sister’s three now-orphaned children. The Quinde family had driven to her house from their home hours north to drop off Sayira before she was to start classes at a public university on a scholarship to study medicine.
The aunt says “I never thought my life would be destroyed in a minute.” AP