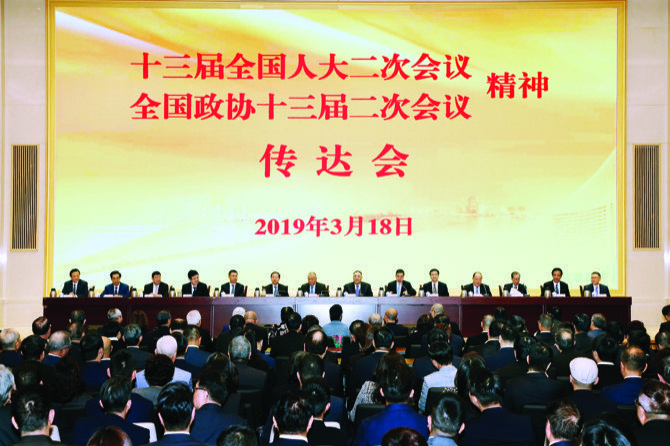 Former Chief Executive Edmund Ho has implored Macau to refrain from behavior that is not conducive to solidarity and stability. Ho made this suggestion yesterday, at the Central People’s Government Liaison Office of the Macau Special Administrative Region.

Yesterday, members of the Chinese People’s Political Consultative Conference (CPPCC), representatives of Chinese companies in Macau, leaders of the Macau government, and other Chinese government officials and important political persons from Macau were present at the Liaison Office to study the spirit of the most recent sessions of the CPPCC and the National People’s Congress (NPC).

During the meeting, mobile phone service was fully blocked, with the majority of the attendees listening to the study presented by these five individuals.

When presenting his speech, Edmund Ho focused on the fifth Macau Chief Executive election – which will take place this August, according to Zhang Xiaoming, Director of the Hong Kong and Macau Affairs Office.

“I am fully confident, and I believe that the Macau people have the wisdom to elect a Chief Executive who meets the requirements of the Central Government and who is also responsible,” said Edmund Ho.

The former Macau Chief Executive remarked that one of the Central Government’s requirements for the next Chief Executive is that the official is able to “take the lead in making a political stance” and “stabilize and unite society.”

In addition to the Chief Executive election, the speakers also conveyed the Chinese Central Government’s hopes for the development of the Greater Bay Area (GBA).

The speakers highlighted parts of the GBA plan, including: having more Macau residents living in Hengqin and other parts Guangdong, developing Macau’s tourism industry, developing the Chinese medicine industry in Macau and Hengqin, and having more Macau youth launching entrepreneurship projects in the Bay.

Besides the frequently-mentioned plan, Fu noted that “there are institutional differences in promoting the integration of Macau into the development of GBA. Everyone here feels it directly. [The government] needs to push forward institutional innovation and institutional coordination in order to let passengers and cargo flow freely within the GBA.”

Some speakers, including Ho Iat Seng in particular, not only expressed the Chinese Central Government’s hopes for Macau, but also highlighted Beijing’s endorsement of the work of Macau’s current government, mainly associated with 2018.

According to Ho, the Chinese vice premier commended Macau for having established a national security committee, as well as improving and protecting the mechanisms and systems of national security.

“[Macau] organized the first overseas national security education exhibition and achieved the hanging of national flags and singing of the [national] anthem in primary schools, in middle schools, in high schools and in universities. Macau completed the anthem law establishment,” listed Ho.