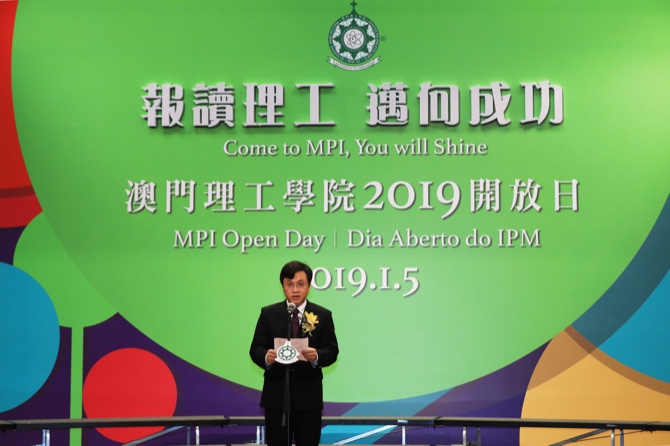 Marcus Im delivering his speech during the Open Day

According to a statement issued by the institute, it hosted a series of activities including guided campus tours, exhibitions of teaching and research achievements, physical fitness trial tests, sports performances and interactions, and workshops on art and design.

IPM also held nursing operations, experiment demonstrations, skill and talent shows, library visits, and teaching aid tutorials.
In his speech, the president of IPM, Marcus Im, said that the Ministry of Education of China recently announced that the institute had been awarded the “National Teaching Achievement Award 2018” which is presented every four years by the State Council.

The award given to the IPM program is titled “Towards constructing a new model for international talent training – Internationally Recognized Engineer
Education Program: Theory and Practice.”

In his speech, Im also noted that the students have won the national “2018 China Adolescents Science and Technology Innovation Contest”, the gold and
silver prizes in the 2017 and 2018 China College Students “Internet Plus” Innovation and Entrepreneurship Competition organized by the Ministry of
Education, and the gold prize in the Pan-Pearl River Delta Region Universities IT Project Competition.

According to the statement, IPM has trained nearly 20,000 graduates in the fields of Chinese-Portuguese-English translation and interpretation, information technology, gaming management, public administration, business administration, health care, sports, as well as in the cultural and creative industries.
The president of the institute further emphasized that with Macau’s Higher Education Regulations taking effect, it is poised to launch masters and doctoral
programs in key areas.
Applications for the 2019/2020 academic year are open until January 18.

The Macau Polytechnic Institute suspended recruitment for its language therapy program, as its president worries that it would be challenging to find jobs for graduates.  President Im Sio Kei said that it will no longer accept new students for the bachelor’s degree program. “We have to think about the future of our students,” Marcus Im told TDM. “If we keep recruiting more students, it will be a problem for them if they don’t get a job after they graduate.” Im added that there would be sufficient language therapists serving non-Chinese speaking communities in the city.  There are currently 40 students enrolled in the program, who will graduate in 2021 and 2022 respectively. The program commenced in 2017.