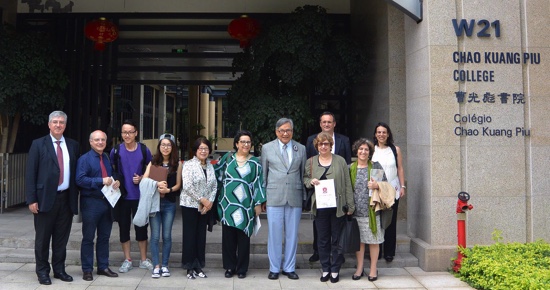 The University of Macau (UM) yesterday signed an agreement with the University of Porto (UP) to promote their collaboration in humanities, science and technology, a statement from UM informed. The agreement will aim to particularly improve collaboration in the areas of Portuguese teaching, health sciences and medicine.
The agreement was signed during a visit by the UP delegation to Macau, led by UP’s Vice Rector (Cooperation and Culture) Professor Maria de Fatima Marinho. The delegation met with UM’s Vice Rector (Research), Professor Rui Martins.
The signing ceremony was witnessed and attended by a number of high-level professors and deans from the two educational institutions.
During a separate meeting, both parties exchanged ideas on the educational philosophies of their respective universities and shared information about their latest developments and future goals. They also expressed their dual hope to foster greater contributions to teaching and research by utilizing their unique strengths.
The key areas of their collaboration will thereby be in the fields of medical research and Portuguese language education.
After the meeting, the Portuguese university delegation visited the UM’s Wu Yee Sun Library and Chao Kuang Piu College.
The guests also visited the two state key laboratories at UM, namely the State Key Laboratory of Analog and Mixed-Signal VLSI, and the State Key Laboratory of Quality Research in Chinese Medicine, and were briefed about their latest developments and research achievements. DB

The Times Higher Education released two new international rankings for universities, including the top 150 education institutions under 50 years old. In that ranking, the University of Macau (UM) has come in at 88, jointly ranked with City University London. That puts the university significantly down from last year when it managed 39 on the list. A secondary report listing the top 100 universities by world reputation was released this week, but it does not include UM. In October 2015, UM was ranked 401-500 on the latest World University Rankings list, a separate report, down from 276-300 in the previous year.