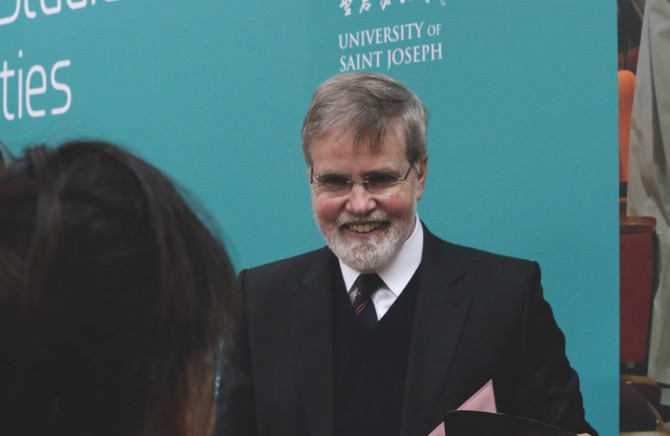 The University of Saint Joseph (USJ) is moving in to its new campus located at Ilha Verde, as planned. Although significant damage was caused to the new campus by the passage of the recent typhoons, Rector Peter Stilwell shared in an interview with the Times that, “the move will be completed by the end of this week. Next week, we already have a meeting organized in the new campus [as well as] the orientation [day] for the new students,” Stilwell said. He added, “settling in will probably take a while… We know that these changes always have a relatively long transition period. In our case this is made particularly difficult because of the recent typhoon.”

According to the Rector, “most of the buildings stood up very well, windows were not broken with exception of one or two that [were hit by] something that was flying around. There were infiltrations of water in one or two places but it wasn’t significant.” He continued, remarking, “what is worst – and will cause us a great deal of work in the future – was the flood that came in from the river and went down to our underground basements.”

The basements of the campus are where most of the sporting facilities and functions rooms are located. Adding to that, as Stilwell noted, the basements were serving, at the time, as a temporary storage place for books as well as equipment that were waiting to be installed. “We had it kept in the basement thinking that would be a safe place, [but it wasn’t] and those were completely destroyed.”

Continuing to address the issue, Stilwell noted that because of this natural disaster the institution was forced to learn the vulnerabilities of the campus very quickly, stating that, “we have to sit with the architects and see how we can avoid such situations from occurring again.”

While some of the damage is being already addressed and will be resolved in a short time, other things will take longer. The Rector gave examples of the work ahead, “we need to redo the whole basketball court, the swimming pool [area], and the gymnasiums… And that can take some time [also] because it requires funds and [at this time] we aren’t sure what kind of funds we can rely on.” He noted that although the University has insurance, it “has its limits” and in regards to the government promising funding to schools and universities, it is still unclear how much that could cover.

Questioned on the sum needed to cover such damage, Stilwell preferred not to throw out any concrete numbers as he mentioned that the assessment on the extension and value of the damage is currently being done with the insurance company. Nevertheless, he assured the Times that it would total in the “many tens of millions.”

Campus challenge is to create a culture within the university

In an academic year that will see the USJ slightly increase the number of students, Rector Peter Stilwell said that one of the biggest challenges will be to use the new campus to start to establish a new culture in the university. For a long time, students and teaching staff had been spreading over different flats and different buildings, namely in the NAPE area, without a real campus where all people could really gather, share and bring new ideas together.

“We had been working out of flats here in NAPE, which meant that our students practically only had the corridors in which to meet and after classes they either sat around in the classrooms or they came down and disappeared,” the Rector said. “In the new campus, we are in a campus atmosphere and the possibilities of students meeting professors while having a cup of coffee and talking among themselves or just going across to library to do some research… That’s what will change,” Stilwell noted, reaffirming that pedagogical quality of the courses will also benefit from the ease the new campus will provide. He qualified that, “how we make good use of that change is the challenge,” adding, “whether our professors and our staff understand that we need to build up a culture and cultures are not things that you bring in by decree.” He noted the need to “develop a relationship” as “when we get intelligent people seated together and talking together then we get good ideas.”

The University is beginning this year with 355 new students; a figure that slightly surpasses the one from the previous academic year of 342 new students.

The Rector also informed that besides the figures growing, it is also necessary to note that new students are enrolling more in Bachelor areas such as education and less in areas like Business where the University registered a very significant drop as there are high number of courses provided in Macau in this field.

“As an institution, we have not [done] badly and we have seen an increase on the number of students that [is also followed] at the Masters level which is probably an area that we need to further develop in the future,” Stilwell concluded.