EgyptAir Flight 804’s automatic radio messages about smoke in the front portion of the cabin were generated minutes before controllers lost contact with the aircraft over the Mediterranean Sea, French accident investigator BEA said Saturday.
The electronic signals offer a puzzling twist to what may have happened to the flight, which went down on Thursday with 66 people aboard. Two error messages, the first at 2:26 a.m. local time, suggested there was a fire on board, while later alerts indicated some type of failure in the plane’s electrical equipment.
While similar signals have preceded air accidents in the past, the warnings aren’t associated with a sudden disappearance from radar as occurred with the Airbus A320 over the Mediterranean. A Malaysian Airlines flight shot down over Ukrainian airspace in July 2014 broke apart so quickly that on-­board systems didn’t have time to send distress messages.
“It’s too long for an explosion and too short for a traditional fire,” said John Cox, a former A320 pilot who is president of the Washington-based consultancy Safety Operating Systems. “It says we have more question than we have answers.”
Spanning three minutes, the warnings were followed by alerts that fumes were detected by smoke detectors, one in a lavatory and the other in the compartment below the cockpit where the plane’s computers and avionics systems are stored, according to the Aviation Herald. CNN reported that the time stamps of the alerts match the approximate time the aircraft went missing.
In the case of a mid-flight fire, the pilots would have been expected to radio a distress call and begin attempts to divert, Cox said. No such radio calls came from the EgyptAir plane. 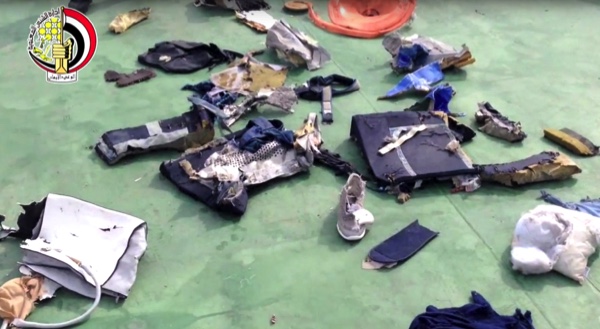 This picture posted on Saturday, on the official Facebook page of the Egyptian Armed Forces spokesman show part of the wreckage from EgyptAir flight 804

The transmissions, which are automatically sent to ground stations so airlines can monitor whether a plane needs maintenance, will probably provide valuable clues once they’re matched up against the plane’s crash-proof flight recorders.
Egypt’s Ministry of Civil Aviation said in a statement Saturday that transmissions collected from the plane may have different causes and require further analysis before drawing any conclusions.
“We are looking at all the information that is collected but it is far too early to make a judgment or decision on single source of information,” it said.
Egyptian and French investigators said they couldn’t comment on reports by CBS News that said the cockpit voice and flight-data recorders had been found. The network suggested on Saturday that search teams had discovered the devices near a site where body parts and aircraft debris had been located.
The so-called black boxes, painted bright orange, store key flight metrics and sounds from the cockpit that could definitively detail what downed the plane. It took salvage crews several years to locate and recover the devices from the doomed Air France AF447 flight that went down in the Atlantic Ocean in 2009. Malaysian Airlines MH370 still hasn’t been found more than two years after it disappeared.
Egypt’s army has released both images and video footage of Flight 804 debris that show an intact yellow life jacket lying beside wrecked seat cushioning, tattered clothes and EgyptAir-branded metal plane parts, quashing hopes of finding any survivors.
The condition of those remains and the way debris was found scattered may offer early clues about how the plane was downed, with a wide field of small pieces pointing to a mid-
air breakup. Large chunks of wreckage might suggest the aircraft hit the water largely intact.
The flight lost contact in the middle of the night in the wider area of the Strabo trench in the so-called Hellenic Arc in the seas south of Greece, where waters are as much as 3,000 meters deep. The wreckage was discovered about 290 kilometers north of the Egyptian city of Alexandria, authorities said.
Officials aren’t ruling out any possible cause, including a deliberate act or malfunction, though Egyptian Aviation Minister Sherif Fathy said the possibility of a terrorist attack is higher than a technical failure.
The jihadist group Islamic State, often quick to claim responsibility for attacks on planes and cities in the Middle East and Europe, hasn’t addressed the latest incident. An Islamic State spokesman released an audio message on Saturday confirming the death of Abu Umar Al-Shishani, a top commander, in a U.S. airstrike in March, but didn’t discuss the EgyptAir downing. It was unclear when the message had been recorded. Andrea Rothman, Alan Levin and Tarek El-Tablawy, Bloomberg 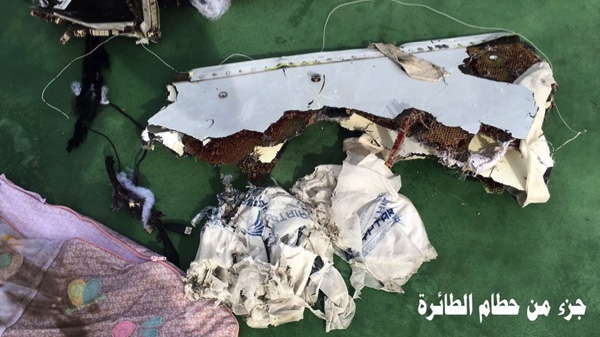